Fears for Pakistani scientist jailed in US

Family concerned about her declining health 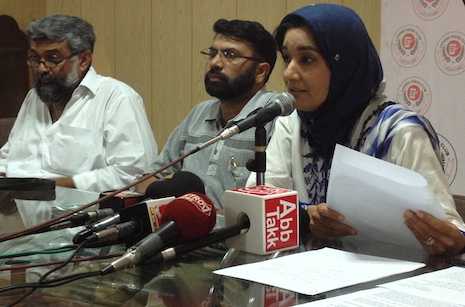 The sister of a Pakistani neuroscientist who was jailed in 2008 for shooting at US officers in Afghanistan will attempt to meet with Prime Minister-elect Nawaz Sharif this week to lobby for her release, amid reports of declining health.

Fauzia Siddiqui said her family is “deeply distressed” after her sister, Dr Aafia Siddiqui, who is serving an 86-year sentence in a federal prison in Texas, said during a phone call that she had recently gone 10 days without food.

The neuroscientist was arrested in 2008 by Afghan police, who said she had been carrying sodium cyanide, a toxic substance, and notes referring to mass casualty attacks and a list of New York City landmarks.

The day after her arrest, she allegedly grabbed an M-4 rifle in her interrogation room and shot at police while yelling “death to America”. She was shot and then flown to the US for trial, where she denied the allegations. She was subsequently sentenced in 2010 on charges of attempted murder and armed assault. She denies US government claims that she is connected to Al Qaeda.

“Prison authorities did not provide her food for 10 days; it was a staged hunger strike”, said Fauzia, who spoke with Aafia on May 14. “The Pakistani consulate later visited her and resolved the issue. Her voice was weak; there was not much we could talk about in 10 minutes.”

Fauzi, who heads the Aafia Movement to campaign for her sister’s release, said she plans to meet the Prime Minister-elect Nawaz Sharif later this week and seek his support for her repatriation.

She also distributed copies of Sharif’s 2008 letter to the then premier in which he labeled Aafia’s confinement as “illegal … and a blatant violation of human rights”, and urged for “speedy steps” towards justice.

A number of protests have been organized in Pakistan to call for Aafia’s release.  Anti-US sentiment runs high in the country, particularly in light of ongoing drone attacks on Taliban strongholds in the north.

In 2010, the Afghan Taliban kidnapped a British Aid worker and proposed a prisoner exchange for Aafia.