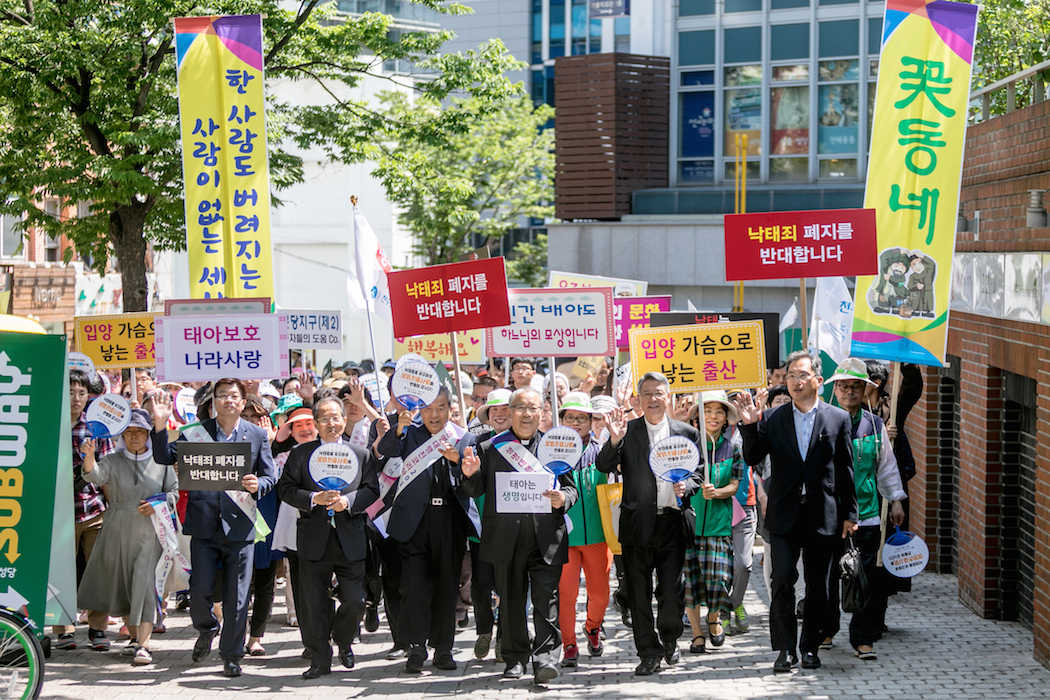 As South Korea remains divided on the issue of abortion, 1,000 people marched through a shopping area in Seoul's Myeongdong district on June 16 holding placards with slogans like "Abortion Out!" and "A fetus is a life!"

It comes shortly after the Republic of Ireland and Argentina — two former bastions of Catholicism in far-flung continents — voted to ease their abortion laws on May 25 and June 14, respectively.

"Abortion is an attack not only on the fetus but on the pregnant woman. It will bring a culture of death into our society and should not even be an option," Cardinal Andrew Yeom Soo-jung said at the march, one of several interlinked events including a concert and a Mass at Myeongdong Cathedral.

The issue resurfaced in late May when the Constitutional Court reviewed a challenge from a medical doctor who was prosecuted for performing almost 70 abortions. The South Korean Church and lay groups petitioned the court earlier to keep the ban in place.

The doctor claimed the current abortion ban endangers women's lives and limits their right to choose their own fate.

But one in five Korean women who have been pregnant at some point have had an abortion, said local media quoting a survey by the Korea Development Institute.

"Even now, when it is illegal to perform an abortion, more than half a million fetuses are aborted every year in Korea," said Thomas Cha Hee-he, chairperson of the March for Life Korea Organizing Committee.

"If it is legalized, more abortions would obviously be carried out. The state should not legally sanction the taking of a life."

The march through central Seoul was aimed at urging the nation's Supreme Court to stick to its guns by not decriminalizing abortion, while also raising people's awareness of the value of each human life.

"All human life has value. Every fetus is a human being who should be protected. Abortion means to kill a baby whose life has just begun," said Cardinal Yeom.

The Bishop's Committee for Marriage and Family Life also released a statement objecting to calls to legalize abortion.

"Although the right of self-determination and choice and the right to pursue one's happiness should be respected, we must remember that the fetus is not just one part of a pregnant woman but a separate life that is subject to the right of life," the statement read.

"When the law allows ethically abnormal activities, it is wrong and distorts [people's] ethical judgment. Killing a fetus is obviously a crime and the criminality of abortion should be maintained."

After holding a public hearing earlier on May 24, the Constitutional Court is expected to release a ruling in late June or July.