A plastic skeleton at a Buddhist temple in the Thon Buri district of Bangkok serves to remind worshipers of the impermanence of earthly things. (Photo by Tibor Krausz/ucanews)

It happened several years ago but Suphit Nunong still vividly remembers the night an apparition came to pay her a visit.

A middle-aged rubber tapper who lives in southern Thailand, Suphit was lying in bed half-asleep one night when suddenly the disembodied head of a woman appeared inside the mosquito net.

“She had blood dripping from her mouth and was staring at me,” Suphit, a shy, personable woman, recalls. “I knew it was a ghost because she was in black and white.”

The ghost, she suggests, was a krasue, an apparition common in Thai folklore. Believed to manifest itself as the floating head of a woman without a lower body, a krasue is often accompanied by a will-o’-the-wisp in the dark.

The nocturnal female spirit is also well known in Laos, Cambodia and Malaysia, although in these countries she goes by different names. She is generally described as a terrifying sight with a woman’s disembodied head dragging free-floating entrails behind it.

“I was quite shocked when I saw the krasue,” Suphit says. “I believe my husband’s mistress conjured up the ghost through some black magic. She sent it to scare me.”

The next day the Thai woman sought help from a Buddhist monk. He gave her a sai sin, a sacred thread, to wear on a wrist for protection against malign spiritual influences. “I didn’t see the ghost after that,” Suphit attests. A shrine to a female ghost in Bangkok who once terrorized locals, according to a popular folktale. (Photo by Tibor Krausz/ucanews) A fear of ghosts runs deep in Thailand, just as it does elsewhere around the region. Age-old superstitions continue to hold sway over Thais from all walks of life.

The country is home, locals believe, to an eclectic menagerie of spirits from towering stickman-like specters with pin-like mouths and lolling tongues to simian-like phantasms that inhabit forests where they hop around awkwardly on one leg.

“I woke up one night to find a shadowy figure pinning me down,” recalls Robiyan Mongpra, a Muslim who manages a clothing store in Bangkok. “I tried to push it off, but I couldn’t move. I cried out, ‘Depart, evil spirit!’ And then it left me.”

To ward off malign supernatural entities, Robiyan recites the Shahada, an Islamic declaration of faith in Allah and his messenger Muhammad.

That doesn’t always work, though. “If I take a nap in the afternoon after 5pm, I may have a ghost attacking me in my sleep,” she says. “It has happened several times.”

Secularists and science educators see persistent beliefs in ghosts in Thailand, and elsewhere across Southeast Asia, as an atavistic throwback to more benighted times. In the past, puzzling natural phenomena and things out of the ordinary were automatically explained with reference to supernatural forces, yet we now have science at our disposal to explain them, these critics argue.

Sleep paralysis, for instance, is a common, scientifically well-understood phenomenon whereby people may experience vivid visions or an inability to move briefly while waking up or falling asleep.

A common tendency to resort to supernatural explanations for seemingly strange occurrences and experiences is holding Thai society back by miring it in old superstitions, argues Jessada Denduangboripant, a biologist at Bangkok’s Chulalongkorn University.

“The answers [to these phenomena] must come from science, not from rank superstitions,” Jessada says. “That’s the only way we can become a truly modern nation.” 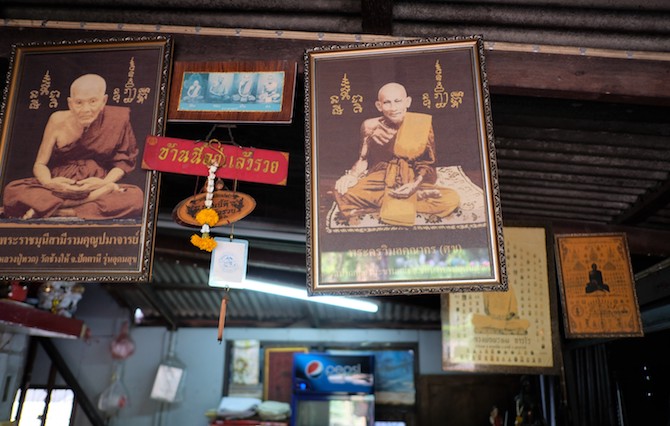 Laminated pictures of venerated Buddhist monks hang from the ceiling of a home in Bangkok to protect residents from malign spirits. (Photo by Tibor Krausz/ucanews)

However, other experts stress that traditional ways of thinking, which ascribe supernatural causes to peculiar circumstances and strange happenings, still have their uses.

“In a way, it’s comforting to think about ghosts as the causes of strange phenomena,” observes Andrew Alan Johnson, an anthropologist at Cornell University in the United States who studies Thai beliefs in ghosts.

“When something bad happens to you or you experience something strange, that demands an explanation. And saying you just got unlucky doesn’t work for many people.”

Belief in the supernatural is integral to local cultures in countries like Thailand, Johnson argues. “The supernatural world has a particular role in Thailand because it allows for otherworldly speculation about everyday things,” the anthropologist says. “To deny the importance of ghosts is to ignore fundamental parts of society.”

Some Thai Buddhists are so terrified of ghosts that they might even consider desperate measures. These include converting to other religions in the hope of receiving permanent protection against phantasms and demons.

One of Johnson’s Thai friends who lives in the country’s north converted to Christianity, partly in order to protect himself from malignant spirits. Yet even that didn’t seem to help.

“One night he is lying in bed and he looks out the window and sees a pair of feet dangling outside,” Johnson says. “He starts to pray but then a head appears next to the dangling feet and the ghost says to him, ‘What do you think you are doing?’”

And that’s when his friend realized, Johnson says, that not even Christianity could protect him from Thailand’s mischievous ghosts.

“He went back to being a Buddhist,” the anthropologist says.