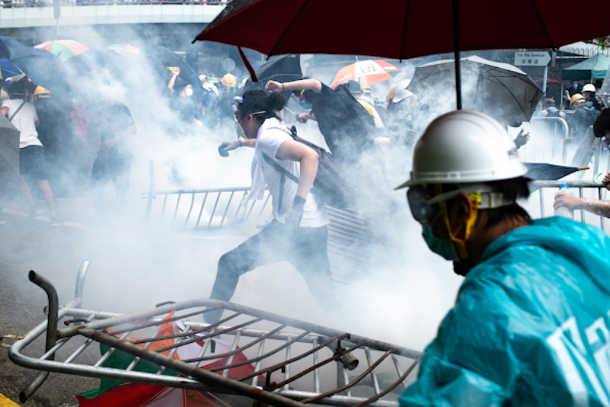 Protesters run after police fired tear gas during a rally against an extradition bill outside the Hong Kong government's headquarters on June 12, 2019. (Photo: AFP)

The move by the ruling Chinese Communist Party (CCP) to create laws giving it security powers in Hong Kong, upending the “one country, two systems” framework that has governed the territory, has been six months in the making.

Last week’s announcement has triggered widespread fear, uncertainty and a sense of panic across a territory in the throes of recovering from the first wave of the Covid-19 pandemic. The move has wide and deep implications for human rights and media freedom.

The new laws that criminalize criticism of Beijing were signed off at the CCP’s 4th Plenum in October as a reaction to the huge street protests that have roiled Hong Kong since last June. They were in response to a plan by Hong Kong’s Beijing-controlled Legislative Assembly to pass an extradition treaty with the mainland that would have allowed Hong Kong authorities to hand over both Hong Kong citizens and foreign nationals to their mainland counterparts.

This would have effectively left critics of the CCP as well as business people dealing with companies on the mainland at the whim of an opaque legal system that disregards the rule of law.

The latest laws are expected to be passed by China’s rubber-stamp National People’s Congress (NPC) on May 28. The body began its delayed and truncated annual session in Beijing on May 22, two and a half months after its traditional March 5 start. It will run for seven days instead of 10-15 as in recent years.

The main section of the draft in front of the NPC Standing Committee (NPCSC) is Section 6, which reads: “The [NPCSC] is authorized to draft laws on establishing and improving the legal systems and enforcement mechanisms for safeguarding national security in [Hong Kong], to effectively prevent, stop and punish any conduct that seriously endangers national security, such as separatism [or secession], subversion of state power, or organizing and carrying out terrorist activities, as well as activities by foreign and overseas forces that interfere in the affairs of [Hong Kong]. The [NPCSC] is to list the above-mentioned relevant laws in Annex III of the [Hong Kong Basic Law], which will be implemented locally by [Hong Kong] by way of promulgation.”

Despite NPCSC vice-president Wang Chen claiming that the new security law would not in fact affect the way Hong Kong is run, the move has been met with deep skepticism.

“The new national security law will deal the most severe blow to the rights of people in Hong Kong since the territory’s transfer to China in 1997,” Human Rights Watch China director Sophie Richardson said.

“Hong Kong people will now have to consider arrests and harsh sentences for protesting, speaking out, running for office and other freedoms they have long enjoyed and struggled peacefully to defend.”

The new laws and protests came only a week after Hong Kong’s Independent Police Complaints Commission released its report on police behavior during the protests. The report absolved police of misconduct and made little mention of police attacks on journalists, underscoring how pro-Beijing many of the territory’ arms of government and administration have already become.

Members of Hong Kong’s foreign media contingent who spoke to UCA News on condition of anonymity said they were concerned that Beijing may bring in the types of strict controls on the media that are in place on the mainland. Authorities have been stepping up the harassment of Chinese-language media critical of Beijing in recent years and several media proprietors have been the subject of violent attacks by unidentified assailants.

On the mainland, all journalists are closely monitored, while foreign journalists need special permission to work, must renew their work permits once a year and are restricted from traveling to certain places such as Tibet and the Tibetan areas of southwestern Chinese provinces.

“The secrecy surrounding the bill has prevented any public discussion about legal changes expected to severely affect the rights of people in Hong Kong and undermine the ‘one country, two systems’ principle, sparking off fears that the government could use the proposed law to silence critical voices,” International Press Institute executive director Barbara Trionfi said.

“There are also concerns that China might use it to expel foreign journalists covering the mainland from Hong Kong.”

The International Federation of Journalists said: “Historically, journalists have already faced scrutiny, threats, physical attacks and legal action for carrying out their work as a journalist in Hong Kong.

“Beijing’s national security law poses a mammoth threat to democracy and freedom of expression in Hong Kong, limiting dissent under a veil of national security. The IFJ urges Hong Kong authorities to acknowledge how crucial it is to protect the public’s right to know.”