When most live within the secure boundaries of a prudent church, those who challenge a corrupt system become victims 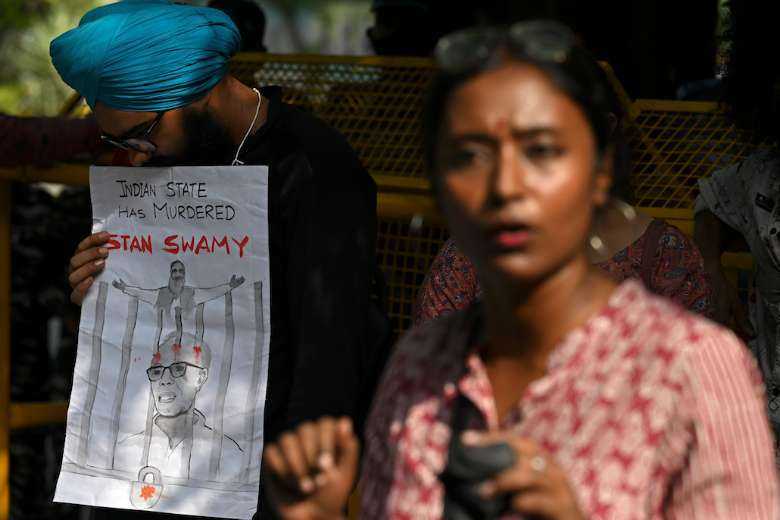 Indian students take part in a protest in New Delhi on July 6 after Father Stan Swamy, who was detained for nine months without trial under anti-terrorism laws, died on July 5 ahead of a bail hearing. (Photo: AFP)

The tragic death of Father Stan Swamy has triggered an unprecedented outburst of grief and fury against a system that unleashed a reign of cruelty to let an innocent champion of the poor die so miserably.

The rallying cry over a victim of the state’s terror from across India and the globe has once again put the spotlight on the dangers of speaking up for the exploited and the neglected.

Father Stan was a Jesuit missionary who stood with India's tribal people to oppose state policies that they thought went against their constitutional rights as tribal people and Indian citizens. The state wanted to silence him, remove him from the leadership of tribal people and intimidate others from taking up such positions.

Stan is a modern-day martyr who followed Jesus, who was crucified because he became a threat to the discriminatory social, political and religious system of his time.

Father Stan’s nine months of incarceration without trial, including five weeks in a hospital, and repeated denial of bails are utterly deplorable. But his suffering and humiliation have shed light on the incredible service people like Father Stan have been rendering amid threats of intimidation, persecution and even death.

Indeed, with his death, this 84-year-old priest has become an immortal global icon of justice and human rights. Many Catholics see in him an Indian Jesuit saint.

As the dust settles, it is time to turn the mourning into a conviction by celebrating the model life of a priest who left a comfortable ministry as a researcher and writer to embrace a mission to advocate the rights of poor indigenous people and socially poor Dalits in the mineral-rich but largely impoverished eastern Indian state of Jharkhand for about four decades.

He came to be seen as a threat to an exploitative system, just as Jesus was viewed as an enemy to discriminatory practices of his time. The Jesuit priest battled for the underprivileged as a lonesome rider on a lonesome road.

He crossed the lines, some say softly. He could have been a bit more prudent, some others say. “Be prudent” is the dictum that Catholic leaders repeat to missionaries at the forefront of the fight against injustice and political deceit. The cliché is a direction to not offend the ruling powers and to return to the safety of the Church's walls when danger signs are seen.

Father Stan did neither. He stood up against the state and refused to step back. He boldly said he was ready to face the consequences “whatever they may be.”

But there are questions here for the official Church. What role did the official Church play in supporting Father Stan when he singlehandedly mobilized tribal people and Dalits for their rights against ruthless industrialization in Jharkhand? He surely had backing from the Jesuits but not from the church apparatus that failed to embolden the lone crusader for the good of common men.

When the priest was arrested and jailed, thousands of Catholics including clergy and religious marched on the streets, while Christian and non-Christian groups strongly condemned his inhuman treatment. But why was the official Church hierarchy largely silent?

The Federation of Asian Bishops' Conferences issued statements to deplore his arrest and demand his release, but we have not seen any statement from India’s bishops’ conference deploring the arrest and categorically asking for evidence to bracket him as a Maoist conspiring to organize violence. The Church was not ready to challenge the state then, and it still is not.

The prudence of the Church in dealing with sensitive issues simply means to be silent or withdraw from them with timidity. In a sense, Father Stan was a victim of this prudence and timidity. His story could have been different had the Church in India collectively shown the courage to challenge a system that victimized him.

The case is the same in most parts of Asia where the Church is a minority. Despite its significant contributions to nation-building through education, healthcare and social services, it is ignored in national policymaking. The Church remains a meek, humble and silent servant because of its inability to speak truth to power.

The prudence-cowardice of the Asian churches is unacceptable in light of the persecution and martyrdom that have filled the Church’s history of more than two millennia. If not to stand for the weak and suffering, why should the Church exist? A church that cannot stand with the poor has no right to call itself the Church of Christ.

Missionaries like Father Stan not only work as lone warriors but have the double challenge of not offending the Church and the state. The official Church will often not back their work for fear of offending the state. They also need to tread a fine line by avoiding words and actions that may be seen as an attack on the Church.

Clergy, religious and laymen have not only opposed the military junta and state-sponsored violence but also opened up their hearts and homes for the oppressed

However, there are some sterling examples of churches in Asia standing up against unjust governments. One example is the Catholic-majority Philippines, where clergy, religious and laymen relentlessly challenge the regime of President Rodrigo Duterte for its utter disregard for human rights. They have even faced death threats. Activist priest Father Amado Picardal is among five priests who escaped assassination for opposing the brutal anti-drug war that has claimed thousands of lives.

In conflict-torn Myanmar, the Church has become a living witness of faith. Clergy, religious and laymen have not only opposed the military junta and state-sponsored violence but also opened up their hearts and homes for the oppressed despite renewed attacks and killings. The conflict has brought out the best of the Church in Myanmar.

The Church’s minority status and lack of political weight to influence policies and actions in most parts of Asia might be a reason for its timidity, but more has to do with its conviction. When most people love to live within the secure boundaries of a prudent church, those who stand up to challenge a corrupt system become victims.

Imagine a situation of India’s more than 180 bishops courageously standing up to speak truth to power. Thousands more would join them and the Church would fulfill its mission of preaching “good news to the poor.”

That is exactly the vision of Pope Francis, who said: “I prefer a church which is bruised, hurting and dirty because it has been out on the streets, rather than a church which is sick from being confined and from clinging to its own security.”  Father Stan shared that vision of the “bruised and hurt” church.

The initial outpouring of sadness and rage over Father Stan’s tragic death will evaporate soon. But his life and death should generate a rethink of the Church's mission in authoritarian Asian nations.