Government offer for land for airport expansion too low, they say 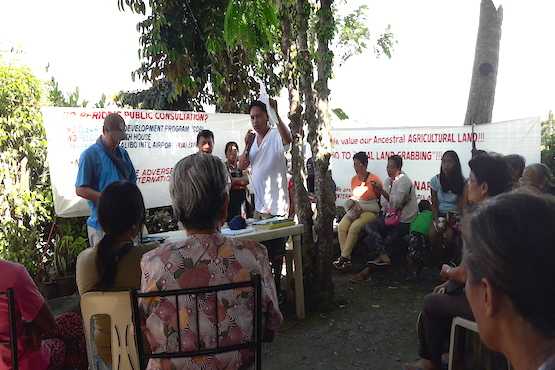 Leaders of the farmers' group in the town of Kalibo in the central Philippines hold a meeting on May 7 to prepare for negotiations with the government over the proposed expansion of a local airport. (Photo by Jun Aguirre)

Some 800 farmers in the central Philippine island of Kalibo are hoping for the intercession of a saint as they launch this week protests against the expansion of an airport in their town.

The farmers are complaining of the "unfair price" offered by the government for properties that will be affected by the expansion of an airport that serves as the gateway to the resort island of Boracay.

The expansion will cover some 326 hectares of farmlands in at least six villages.

"We are not opposing the planned expansion, what we want is a transparent and just compensation for our lands," said German Baltazar, one of the leaders of the farmers' group.

The government has set a meeting with the farmers on May 15, the feast day of St. Isidore, the patron of farmers.

Jean Macabales, a community leader, said the date of the meeting could be a "blessing," adding that even if the expansion project pushes through the farmers are hopeful that their saint "would provide us in our daily needs."

Reynaldo Quimpo, vice governor of the province of Aklan, said the government had already helped most landowners affected by the project, but the people are complaining of the low price the government offers for the properties.