Farmers resist Indian state's move to take over their lands 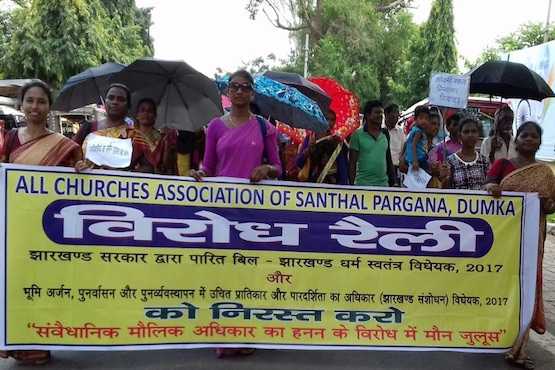 A church-led group walks to join a Aug. 19 gathering in Ranchi to protest a government move to amend a law that protects farmlands. Unrest continue as the state moves ahead with amendments. (Photo supplied)

Unrest continues in India's eastern Jharkhand state over a law that farmers say would help government acquire their lands without consent.

The state government denied permission for a Sept. 16 protest in the state capital Ranchi, which organizers say would have attracted hundreds of thousands of people.

However, farmers are vowing to continue protests at district and village levels.

Protests have intensified since Aug. 12 when the state legislature amended provisions of the federal Land Acquisition Act of 2013 to obtain land for state projects such as schools, colleges and hospitals.

The original law stipulated that before acquiring land for such projects, the 'social impact' needed to be assessed and village permission granted.

However, the amendments removed these provisions.

Governor Draupadi Murmu, a representative of the federal government in the state, referred the amendments to India's president on Sept. 5 since his approval is necessary to change a federal law in a state.

He has joined protests along with other church leaders.

"We will intensify protests and take all legal recourse to restore the power of village councils," Father Lourdswamy said.

The 2013 federal law repealed the British Land Acquisition Act of 1894, which allowed rulers to take over private land.

The modern law added provisions to end this draconian aspect of the law, the Jesuit priest said.

Bishop Vincent Barwa of Simdega, who is based west of Ranchi, told ucanews.com that the amendments constitute a renewed attempt to take over protected lands.

But protests of tribal people, led by the church and civil society groups, successfully pressured the state's governor into rejecting the legislative amendments.

"It threatens our very existence," said the bishop, himself a tribal.

Sixteen percent of the state's 32 million people are tribal. The state has some 1 million Christians, or 4.3 per cent of the population, almost all of them tribal. This is almost double the national percentage.

Devkumar Dhan, from a tribal council that coordinates protests, said an awareness program aims to warn tribal communities of the dangers to their land unless the land acquisition amendments are aborted.