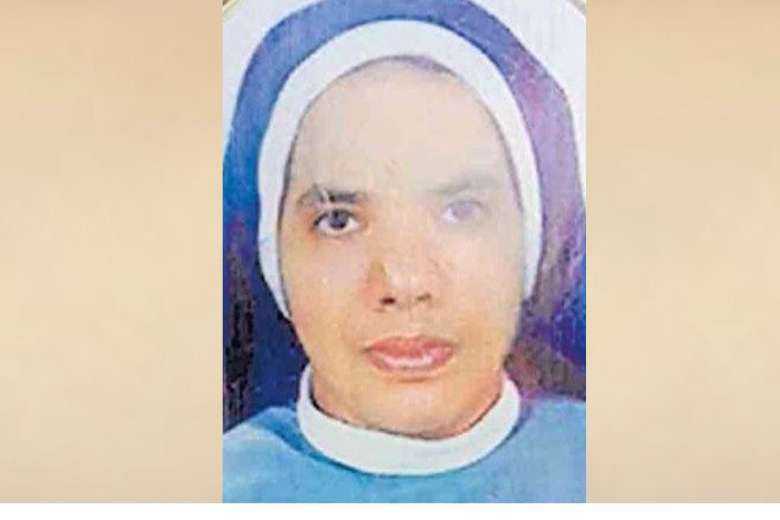 Sister Mary Mercy, a member of the Franciscan Immaculate Sisters, was found dead in her convent chapel in Jalandhar Diocese in Punjab state on Nov. 30. (Photo supplied)

The family of a Catholic nun who was found hanged in northern India are demanding a police probe into her death after suspecting foul play.

The body of 30-year-old Sister Mary Mercy, a member of the Franciscan Immaculate Sisters, was found on Nov. 30 hanging from a window of her convent chapel in Jalandhar Diocese in Punjab state.

The nun’s body was sent to her home parish in Alappuzha district of the southern state of Kerala on Dec. 2.  She belongs to St. Andrew's Basilica Parish of Arthunkal in Alappuzha Diocese, said diocesan public relations officer Father Xavier Kudiamseery.

The nun’s father, John Ouseph, has filed a complaint with the Alappuzha district collector, the top government official in the district, demanding a probe into her death.

The complaint said the family suspected foul play and called for a second autopsy in Kerala following one done in Punjab “to bring out the truth and ensure” justice to the family.

Sister Mercy suffered from no pressures that could force her to take the extreme step of suicide, Ouseph said.

She was jovial and spoke about buying Christmas gifts and about planning for her birthday on Dec. 2

The family had a telephone conversation with her on the night before her body was found. “She was jovial and spoke about buying Christmas gifts and about planning for her birthday on Dec. 2. The conversation ended with a promise to call on her birthday,” Ouseph said.

“The convent has not explained to me the situation that led to her death,” the complaint said, adding that her behavior exhibited no sign of mental pressure or physical ailment.

But the congregation’s delegate vicar, Sister Maria Indira, ruled out any foul play in an official communiqué to media.

She said Sister Mercy had left a suicide note asking for a pardon from her family members and her congregation for taking the extreme step.

Her body was sent to Kerala because her suicide note expressed a wish to be buried in her home parish, the communiqué said.

Sister Indira said Sister Mercy was preparing for her final profession in January during her visit to her home state. “She was also very pleasant and happy.”

Just like her family members, “the nuns in the congregation are deeply in pain over this incident,” Sister Indira’s note said.

A Catholic priest working in Jalandhar Diocese, who did not want to be named, told UCA News that the nun “was happy and was seen talking to her family members on the night of her suicide.”

Two nuns have accompanied her body and are ready to present themselves before any investigation agencies after the family raised suspicions, he said.

A priest of Alappuzha Diocese, who also sought anonymity, said the nun's body was scheduled to be brought directly to the government-run medical college in the district on Dec. 2 for an autopsy.

“Funeral prayers and burial are scheduled to take place only after the post-mortem in Alappuzha. If it is delayed, the funeral can happen only tomorrow,” he told UCA News on Dec. 2

DESMOND COUTINHO
Death by suicide has a high occurrence in official reports for the deaths of Roman Catholic nuns. The Bishop of Jalandar is free but under trial for the rape and sodomy of at least one nun. Pope Francis has accepted that whole congregations of nuns are being held in sexual slavery by clerics. Leading pundits like John Dayal claim that reporting such abuse brings only mutual assured destruction. When the nun is eliminated most catholics remain happy in the run up to Xmas. The retired High Court judge who had forced a police investigation of the Bishop of Jalandar has also announced that he will try a private prosecution when the Bishop is found not-guilty. The Bishop is a rich high caste catholic. And that's how the catholics of India prefer things. I remain the last living Xtian in India not a holy one just the last one.
Reply

MARIO FERNANDOPULLE
Celibacy and virginity for life are not ordained of God. In Genesis 2:18 God says it is not good for man to be alone. In 1 Corinthians 11:11 through St. Paul indicates the necessity for man and woman to be married. It is very very rarely that some are called to be celibates, virgins perhaps for a while for the sake of missionary work in difficult circumstances which do not align well with the carrying out also the responsibilities of a person towards his / her spouse and children e.g. missionary work for a temporary period in communities of aborigines in very underdeveloped areas in India (Daylit) (?).Celibacy for Catholic priests or Catholic nuns is has been made obligatory for the Roman wing of the Catholic Church. It is not obligatory for the Catholic Greek Orthodox wing of the Catholic Church. Celibate priesthood and celibate nunhood are human arrangements. Abraham, one of the greatest saints married Keturah after his wife Sarah died. Patriarchs, great saints Isaac and Jacob are married persons. Married persons can very well become saints. The parents of St.Therese of Lisieux are canonised saints. At least at the beginning candidates for the Roman Catholic priesthood and nunhood are usually very holy persons from very holy families. How nice it would be if these holy candidates get married and lead holy married lives and do missionary work in addition to doing their duties towards their spouses and children and neighbours.

SIMON JOSEPH
See the title! See how this UCA News ( Union of Catholic Asian News) struggles hard to put the Congregation on the defensive for a Suicide committed by a Nun who had left behind her Suicide Note ???? "INDIA Family suspect foul play after Indian nun found hanged ". To give more credence to their story this Agency has quoted a Priest who probably was hiding there in the Convent. Very similar to the Thief Raju who is the main witness in the Sr. Abhaya Case :" A Catholic priest working in Jalandhar Diocese, who did not want to be named, told UCA News that the nun “was happy and was seen talking to her family members on the night of her suicide.”
Reply