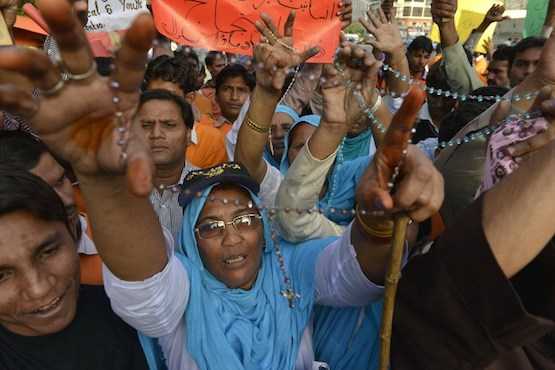 Pakistani Christians protest against the murder of a Christian couple in Kasur on Nov. 10, 2014. A Christian girl from the same village in January was allegedly kidnapped and forced to convert to Islam, while marrying her abductor. (Photo by Arif Ali/AFP)

A teenage Christian girl from Kasur district in Pakistan was abducted and converted to Islam before marrying her Muslim kidnapper, her family charged.

The girl was alone when she was abducted by a group of Muslim men, her brother Riaz Masih, said.

A police case has been lodged against the kidnappers with police in Kasur.

The alleged kidnapping occurred in a village in Kasur in Punjab province, the same village where a Christian couple was burned alive in November 2014 after a false allegation of desecration of the Quran.

"We have been told that she has married after converting to Islam with a Muslim man Tanvir, her kidnapper. My sister, Saima Bibi, is 15 years old. We have her birth certificate, which will be produced before the court," he told ucanews.com.

Father Joseph Louis, executive secretary of Caritas Pakistan Lahore, described it as an attack on freedom of religion.

"This is unacceptable, we totally condemn this. The girl was not even mature as the Child Marriage Restraint Act defines the official age of marriage for girls to be 16 years," said the priest who has overseen several Caritas projects in Kasur district.

"We demand that courts give justice to the affected family," he said.

However, police officer Noor Ahmed said that the girl had converted to Islam and that two were now a married couple as per documents provided to police.

"We will produce the couple before a local court, where the girl can testify whether she was kidnapped or willingly married the Muslim man," he said.

Sardar Mushtaq Gill, a Christian lawyer and head of Legal Evangelical Association Development, condemned the kidnapping and "forced conversion of a Christian girl."

"I have experiences of a number of such cases that the perpetrators often take a plea of marriage and conversion to Islam so that they can save themselves from criminal charges of rape and kidnapping," Gill told ucanews.com.

"This is one of many cases where girls from religious minorities are kidnapped and converted to Islam to evade punishment," he said.

Rights activists allege that large numbers of Christian and Hindu girls are kidnapped and converted to Islam by their kidnappers.

The Movement for Solidarity and Peace, a research, education and advocacy group, said in a report that about 700 non-Muslim girls are converted to Islam each year in Pakistan.

The forced marriages/conversions follow a distinctive pattern, the agency said, with Christian girls — usually between the ages of 12 and 25 — being abducted, converted to Islam, and married to the abductor or a third party. The victim's family usually files a complaint, which is countered by the abductor.

The victim remains in the custody of her abductors for the duration of judicial proceedings, during which time she may be subjected to "sexual violence, rape, forced prostitution, human trafficking and sale, or other domestic abuse," the report said.