Military honor guards stand next to the urn containing the ashes of former Philippine president Benigno Aquino during a public viewing at the Church of Gesu at Ateneo de Manila University in Manila on June 25. (Photo: AFP)

A Jesuit-run university was holding a public viewing of the remains of former Philippine president Benigno Aquino on its Manila campus on June 25 following a speedy cremation.

Aquino’s body was cremated several hours after his death on June 24 in Manila’s Quezon City, his youngest sister Kris Aquino confirmed. She said the family decided on a quick cremation to avoid a large event that could spread Covid-19.

His burial was scheduled to be held in the Manila Memorial Park on June 26 beside his parents and democracy icons Benigno and Corazon Aquino.

Prior to that Ateneo de Manila University, his alma matter, agreed to hold a public viewing for supporters and friends to pay their last respects to the former president.

Family friends and guests were to be allowed to enter a private area with a maximum capacity of 140 people while the public could walk in front of the urn in the university's Church of Gesu to say a prayer for a few seconds.

Strict health protocols, including social distancing, were to be observed.

He wasn’t perfect but he was a good president: honest, without personal ambition, seeking to serve

“Ateneo and the Aquino family ask that visitors cooperate with the campus personnel to ensure that the public viewing is safe, secure and respectful,” the university said in an announcement.

A livestreamed Mass was to be held at the university later on June 25 for the former president.

“He wasn’t perfect but he was a good president: honest, without personal ambition, seeking to serve,” he said in a social media post. 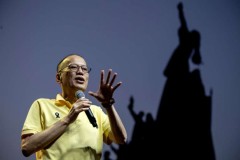