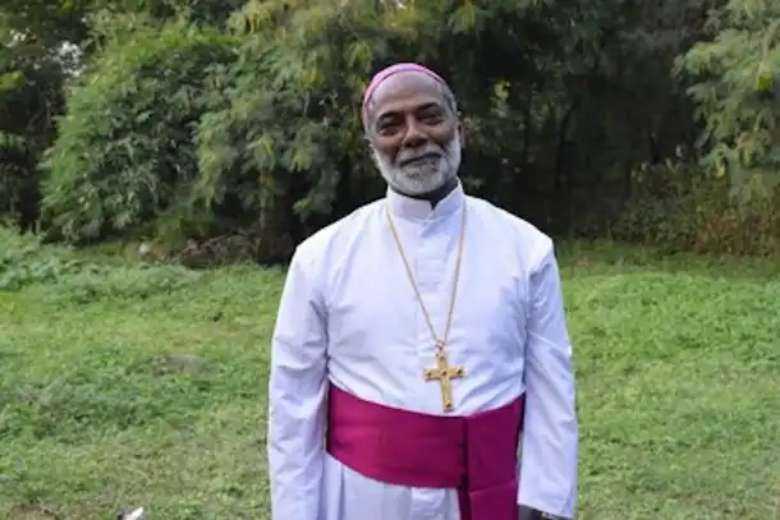 A file image of Bishop Thomas Thennatt of Gwalior who died on Dec. 14, 2018. (Photo supplied)

Family members of an Indian bishop who died in a road accident three years ago have demanded an impartial probe into his death amid suspicions of foul play.

Bishop Thomas Thennatt, 65, of Gwalior Diocese in the central Indian state of Madhya Pradesh, died in a car crash on Dec. 14, 2018.

“We have serious doubts over his accidental death. We believe he was killed,” said Claramma Constatine, a younger sibling of the bishop.

A retired nurse, Constatine, accompanied by her son-in-law, Pastor Lovers Masih, held a press conference in the state capital Bhopal on March 27 to announce the family’s plan to move the high court requesting a probe by the Central Bureau of Investigation (CBI).

Speaking to UCA News, she claimed that diocesan officials had intimidated the family after the accident. “My brother’s body was buried in a hurry, without the mandatory post mortem, and the diocese denied us permission to take his body to our home state Kerala,” she added.

Constatine alluded to the fact that there were three others including the driver traveling in the car at the time of the accident. But none of them suffered even a minor scratch on their bodies and gave contradictory statements about the whole incident, raising suspicions.

“When the sealed room of the bishop was opened, his ATM card and checkbook were missing,” she said.

Similar suspicions led to the body of the bishop being exhumed in June 2019. A post mortem examination was conducted six months after his burial following a petition by Dolly Theresa, a local Catholic who approached a court.

In her complaint, Theresa accused the police of not investigating the circumstances that led to the bishop’s death.

The family members said the post mortem report mentioned “three deep wounds on his body.” These wounds may not have been sustained in the accident and perhaps caused his death, they suspect.

The bishop’s family also questioned the conduct of the driver who refused to cooperate with the police probe and expressed surprise at his later employment by a church-run school on higher wages.

Church officials, however, denied all allegations and said that they were open to investigations and had nothing to hide

“We don’t want anything but the truth must come out,” said Pastor Masih, alleging that Catholic Church leaders were refusing to communicate with them.

“But there was no response from anyone,” said the protestant pastor, who married Bishop Thennat’s niece.

Church officials, however, denied all allegations and said that they were open to investigations and had nothing to hide. “It is well known that the prelate died in the road accident,” they said.

Bishop Thennatt was the first member of the Society of the Catholic Apostolate, popularly known as the Pallottines, to become a bishop in India.

Pope Francis appointed him as bishop of Gwalior on Oct. 18, 2016. He was ordained a priest in 1978 and had worked with Guntur Diocese in Andhra Pradesh before moving to Madhya Pradesh in 1991.