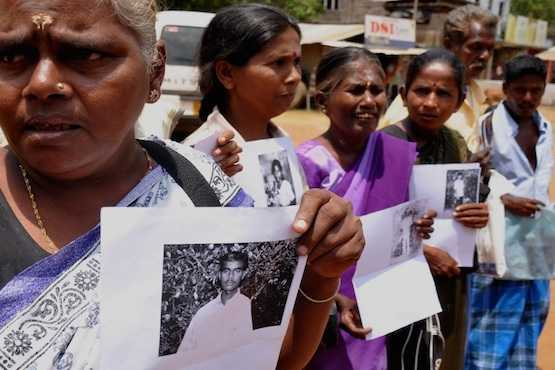 Relatives of people forcibly disappeared in northern Sri Lanka have marked one year of an ongoing protest to seek justice for their loved ones.

The permanently manned picket line outside a Hindu temple in Kilinochchi, in the country's Northern Province began on Feb. 19 2017. Many of the thousands who disappeared went missing during the country's bitter civil war (1983 – 2009). It is unknown exactly how many people are missing but Amnesty International estimates that up to 100,000 families are affected.

The protesters said after having waited so long to find out about their relatives they were disillusioned with local legal avenues and were looking to seek justice through an international tribunal.

Yogarasa Kanagaranjani, whose son disappeared during the last stages of the civil war, said the families would continue their struggle until they get justice.

"The president has not lifted a finger on the matter. All we are asking is where our missing ones are," she said.

To mark the anniversary more than 500 people from across the country, including priests, nuns, activists and politicians traveled to the protest site to show solidarity with the protesters.

Sandya Eknaligoda, the wife of a disappeared cartoonist, Prageeth Eknaligoda, traveled over 300km from Colombo.

She said the government, elected in 2015 by people hoping to get answers to the disappearance issue, has failed to take satisfactory steps to resolve it.

"Still no firm action has been taken against the perpetrators or to fulfill promises made to the UN," said Eknaligoda.

Anglican priest, Reverend Christy Daniel, said relatives have the right to know where their loved ones are.

"Refusing to give up information on a large number of disappearances is a great barrier for the reconciliation process," he said.