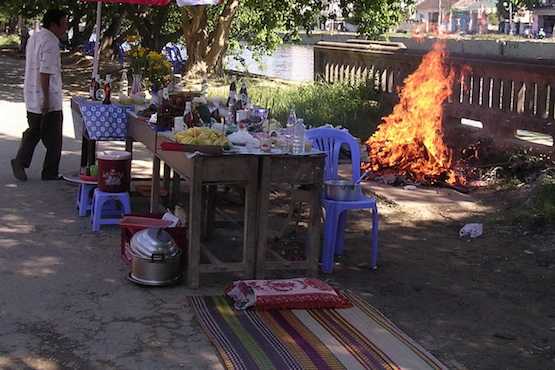 A man sets up a table with food, fruit, alcohol and incense on March 9 to commemorate the 50th year since his relatives were killed in the Tet Offensive in Hue City, central Vietnam. (ucanews.com photo)

In a city in central Vietnam in March, Le Van Dinh knelt down on the ground, offering incense before pictures of his father and uncle as he prayed for the souls of two of the many casualties of the 1968 Tet Offensive.

He also offered them food, fruit and alcohol on a table in front of his house as he tried to forget the pain of the lives lost half a century earlier.

This year, Dinh, a resident in Hue city, commemorated the 50th anniversary of the deaths of his relatives who were killed in the bloody Tet Offensive carried out by northern communist forces.

The surprise military offensive on the eve of Tet, or the Lunar New Year festival, occurred on Jan. 30, 1968. It targeted over 100 cities and outposts across U.S.-backed South Vietnam.

The fiercest battles between South Vietnamese forces and their American allies against soldiers from the North took place in major cities including Saigon, now Ho Chi Minh City, and Hue, then the third-largest city in southern Vietnam.

Northern troops held out in Hue for 26 days before they were beaten back by U.S. Marines and opposing troops.

Dinh, 51, said that on Feb. 19 of that year, four or five communist guerrillas with AK assault rifles told his family they would take his father and uncle for three days of "re-education" before safely returning them home.

"That was the last time we saw them," he said in a muffled voice.

His father and uncle served as local junior civil officials.

Dinh, who earns a living as a motorbike taxi driver, said two weeks later his mother found his father's remains among hundreds of decaying corpses buried in 14 mass graves discovered near a local school.

His father's hands had been tied to those of 15 other victims.

Dinh, who was just four months old at the time, said his mother only informed him and his six siblings about the terrible fate that befell his father before she died of illness 35 years ago.

He now honors his father's memory every year on the 22nd day of the first lunar month, which this year fell on on March 9. People visit the tombs of their relatives who died during the Tet Offensive at Ngu Tay cemetery on the outskirts of Hue City on Feb. 18. (ucanews.com photo)

Benedictine Stanislas Tran Minh Vong, 81, who witnessed the offensive, said most of his fellow monks managed to flee their monastery when it was ruined by bombs and seized by communist fighters.

Israeli Father Urbain David and French Father Guy de Compiegne were arrested and killed by soldiers from North Vietnam who mistook them for Americans.

Brother Vong said the two priests' corpses were discovered in mass graves on the outskirts of the city three months later by Benedictines.

It has been estimated that 2,800 civilians were killed and 3,000 more went missing in Hue, a key target of the bloody offensive.

During the assault, which lasted for nine months throughout Southern Vietnam, forces from both sides suffered heavy casualties, especially the communists from the North. They reported 111,306 dead and injured, in addition to tens of thousands of revolutionary supporters who also lost their lives, according to government statistics.

"We commemorate the death of my husband every year by attending Mass at church," said Maria Nguyen Thi Men from Hue's Phu Cam parish.

Men said her husband, who made a living cleaning the laundry used by American troops, was taken from the church where he was sheltering along with 70 other men on Feb. 2, 1968. He was also never heard from again.

She claims her family suffered discrimination after the Vietnam War ended in 1975. Her children were banned from working at schools because their father served the former government in the South, she said.

"The offensive was complete nonsense and crazy, because only Vietnamese were killing other Vietnamese," Men said.

Many innocent civilians were murdered out of malice at the hands of local communist supporters, she added.

"The government should erect a memorial to all those nameless victims including soldiers from both sides during the offensive," the mother of two said.

A probe should be launched to find out exactly what happened to the innocent civilians who lost their lives so as to console their grieving relatives, she added.

"We forgive those who murdered my husband and pray for them to do penance for their sins," Men, a member of the local Lay Carmelites, said.

Dinh said he has tried to forgive the killers of his father. He doesn't know if they have already passed away or remain alive and feel guilty for what they did.

"I believe some of them are still conscience-stricken," he said.

"I believe in the principle that everything has a cause. If you do good things, you can be at peace with your conscience," added the Buddhist father of four.

"It is regrettable that the government has shown no sign of wishing to confess to these crimes and reconcile with victims," he said.

In contrast, the government still hails the offensive and praises the spirit of the troops who took part in it, he added.

On Jan. 31 a national ceremony was held in Ho Chi Minh City to celebrate the 50th anniversary of the offensive. It featured stirring songs of patriotic heroism.

Dinh said this "only deepened the wounds of those victimized by that brother-against-brother war."

"But we try to forget our grief and work hard so our children can enjoy a peaceful life," he added.