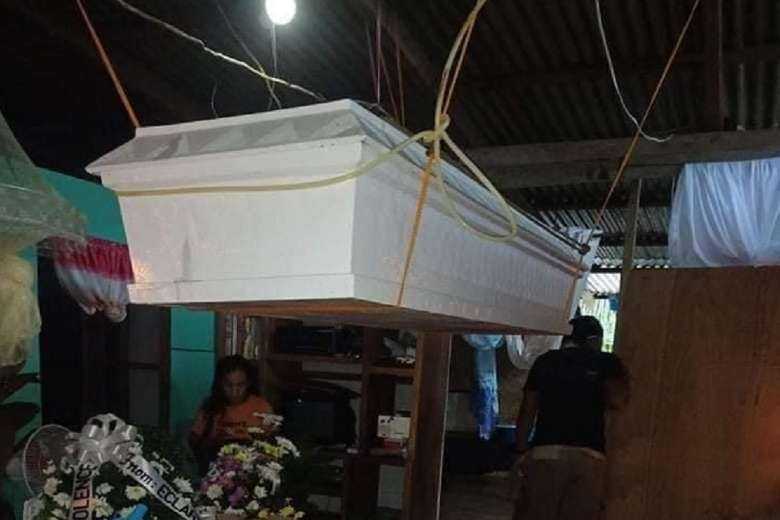 A coffin is seen suspended from the ceiling of a flooded house in Espanola, Palawan. (Photo: Sheryl Suico Tagyam)

Authorities have recounted how families ran for their lives as Tropical Storm Kompasu swept across the Philippines, triggering floods and landslides.

At least 11 people were killed and several others reported missing after the storm battered the country on Oct. 11.

About 6,500 people were forced to flee their homes because of flash floods, including one family in Palawan, who said that before fleeing they had to suspend a coffin containing a dead family member from the roof of their home to stop it from being washed away.

The family, from Espanola, later posted a photo of the coffin suspended by ropes tied around roof beams in their flooded house.

Health officials commenting on the post said it was the “most practical” thing to do given the circumstances because the nearest funeral parlor and church were submerged.

“In my opinion, they did the right thing. Had they tried to take the body to a funeral parlor or church, it would have been dangerous because the flow of floodwater could have carried them away along with the casket,” said one health official who did not wish to be named.

The situation was really terrible. Children were crying, waiting to be saved.

At least four people died on Palawan, while four others were reported missing in monsoon rains brought by Kompasu.

Coastguard officials said they had rescued many residents trapped in their homes because of landslides in rural areas.

“The situation was really terrible. Children were crying, waiting to be saved. Their parents could not do anything because they could only carry one or two of their children through the flood,” coastguard spokesman Francis De Asis told UCA News.

He said many people were bedridden, so rescuers had to enter homes via roofs to bring them to safety.

Elsewhere, at least six people died in landslides in Benguet province, north of Manila, while three others were reported missing.

Another victim was a security guard swept away by a large wave at a port in Cagayan province in the northern Philippines.

Meanwhile, the Department of Agriculture said Filipino farmers suffered agricultural losses worth almost 500 million pesos (US$10 million) as a result of the storm.

Fields were turned into lakes in Cagayan province with rice, cassava and other root crops destroyed.

Caritas Philippines has begun mobilizing help for victims. “We are accepting goods and other donations that we can send to affected areas,” Father Francis Girao of Caritas in Pampanga Diocese told UCA News.