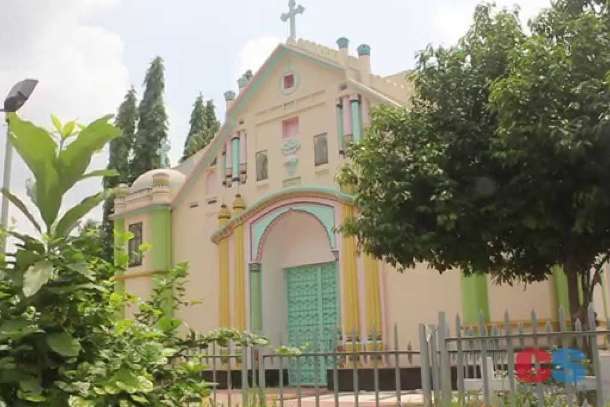 After 17 years of married life, a disastrous storm has rattled the personal and family life of Subir Kashmir Pereira.

Subir, 49, is a Catholic and Bangladesh-born American citizen who settled in Maryland with his wife Angelia D’Silva (alias Sumi) and daughter Sandra Pereira, now 14, in 2007.

On Aug. 11, Sumi secretly left the US with large amounts of money and three passports, including those of her husband and daughter, and arrived in Bangladeshi capital Dhaka on Aug. 14.

Within a few days, Subir received a divorce notice from Sumi through a local court. He was shocked and didn’t have any clue about what had happened.

In Dhaka, Sumi started to reside in an apartment with a couple, Hubert Gomes and Genevi Gomes, in the Mohakhali area of the central part of the city. Soon, they had her married off to their adopted son, Patrick Gomes.

For years, Hubert Gomes has been known as a self-proclaimed Christian saint who claims to be an avatar of St. Peter and St. Anthony.

His apartment is allegedly packed with some 25 religious statues including Jesus, Mother Mary and St. Anthony. He has been arranging prayer meetings for dozens of Christians from Dhaka and rural areas every Monday. In recent years, he has made “disciples” among immigrant Bangladeshi Catholics outside the country, including in the US and Australia, who attended prayers by video calls.

After prayer gatherings, he blesses the congregation with holy water and holy oil, and people make wishes for granting favors including healing from sickness, having a child and happiness in the family. He allegedly receives donations from his “disciples” including hefty amounts of cash and gold ornaments every month.

“My wife has been entrapped and forced to leave me. I came to know she was being blackmailed by a video by Patrick Gomes, the adopted son of the fake saint. Genevi, wife of Hubert Gomes, also motivated my wife to leave me and to marry Patrick Gomes, an immoral man and womanizer who had married three times before,” Subir, a pharmacist and poet, told UCA News.

He said his wife connected with the fake prophet about three years ago and started taking part in online prayer gatherings regularly. In March this year, Hubert Gomes introduced her to his adopted son, Patrick Gomes. “It is a nexus of fraudsters behind this business of money making by hypnotizing and blackmailing people, and it has been going on for years. They have posed as saviors by convincing ignorant people about the blessings of God by something like black magic, and my wife has also become a victim,” Subir said.

Subir has made a series of posts and online live programs on Facebook to expose what has happened.

Many Christians expressed their concern on social media and shared what they know about Hubert Gomes as well as other people elsewhere in Bangladesh. Most have called on the Church and state authorities to take legal and punitive action against those misleading and exploiting Christians for personal gain.

“Hypocrisy in the name of religion is not new in our society and our country. It has been going on for years but both people and church leaders remained silent about it. It is a shame for us that we don’t read the Bible and don’t go to church but we flock to so-called fake saints and prophets for blessings. Time has come to expose them and keep our families away from those hypocrites,” Catholic Shrila Sarker wrote on Facebook.

Several people posted texts, audio and video on Facebook claiming they have been exploited by the fake saint and his family for years.

Catholic woman Pushpa Palma said that in 2001 she started to live with the family as their adopted daughter and in 2010 they had her marry Patrick Gomes, their adopted son. She left the family in 2015 after she came to know about the dark past of Patrick Gomes and due to extreme physical and psychological abuse.

“In 2001, when I was a school student, I came to know about them from my aunt who was close to the family. I was their adopted spiritual daughter and they told me I should never think of leaving them or I would be cursed. So, I always tried to make them happy and to be obedient to them,” Pushpa told UCA News.

She said the family of Hubert Gomes had received huge amounts of money from “disciples” by claiming that God had asked him to build a temple. In reality, he has bought land in Dhaka, purchased an apartment and accumulated lots of money by cheating people.

“I came from a poor and simple family and I left my family by trusting them. Now I realize I have been blackmailed and exploited for their vested interests. I have seen how they manipulated the faith of people and even threatened them about curses including accidents if they didn’t come to prayers and listen to them,” Pushpa added.

Church sources told UCA News that Hubert and Genevi Gomes were Catholic Christians and members of Holy Rosary Catholic Church in central Dhaka, but they were expelled from the church and forbidden from receiving communion 25 years ago.

The cause of the expulsion was Hubert’s decision to leave his wife Bibiana without a proper church marriage annulment process and his live-in relationship with Genevi Gomes without a church wedding.

UCA News has made several attempts to speak to Hubert, Genevi and Patrick by phone but they declined.

The allegations of misleading and exploiting Catholics have prompted the Church to act.

On Sept. 6, Father Subroto B. Gomes, parish priest of Holy Rosary Church, made an announcement asking Christians to stop any kind of involvement with the fake saint.

“We have a large church and adoration center here and large religious statues. You should come to pray here. Why do you need to go to pray with a family who have been expelled from the church and remain as outcasts in society?” the priest said.

Father Gomes said people knew about the wrongdoings of Hubert Gomes for years but remained silent for fear of reprisals such as curses or accidents.

“We have been in touch with our Cardinal Patrick D’Rozario of Dhaka and leaders of Mohakhali Christian Welfare Society, and we have been trying to resolve the matter without any chaos. We have also had a sitting with Sumi, Patrick and community leaders so that we can convince her to go back to the US,” the priest told UCA News.

In the latest development, Sumi left Bangladesh for the US on Sept. 17.

“I have talked to Subir and told him to accept her cordially as she has realized her wrong and repented,” Father Gomes said.

A local Christian leader, speaking on condition of anonymity, said that further social and legal action will be taken against Hubert Gomes and his family as they have tarnished the image of Christians by their unchristian activities in the name of religion.