The hashtag #JusticeforSunitaMasih began trending on Twitter in Pakistan last week. The accompanying photo showed a distressed teenage girl with her hair shaved.

On May 25, I received a call from a reporter from Dawn, Pakistan’s largest and oldest English-language newspaper launched by the nation's founding father Mohammad Ali Jinnah in the 1940s. The journalist was interested in covering the story and wanted further details. I directed her towards another Christian journalist who shared an update from Faisalabad police.

“The incident occurred in Sukkur city of Sindh and Sukkur police are investigating it,” stated the officer, rejecting the news. Police in Sindh province also denied news of any Christian girl being gang-raped and beaten for refusing to convert to Islam.

Meanwhile, social media groups including the United Christian Youth Fellowship, which has 98,400 members on Facebook, kept sharing the controversial post. One member, a lawyer, even shared his mobile number in the hope of getting in touch with those seeking legal aid for the supposed victim.

Finally, on May 27, Daily Scoop TV Karachi reported that the incident was first shared by a Pakistani Christian living in South Korea.

While atrocities with Christian and Hindu girls are a fact, there are miscreants out there who exploit issues

“He is known to spread fake news. Over the next two days, the fake news was tweeted hundreds of time. The majority of tweets originated from Pakistan but many were from India, the US, Canada and other countries,” it stated.

“Such campaigns are designed to malign Pakistan and are in fact counter-productive for minority rights and victims of sexual abuse.”

“While atrocities with Christian and Hindu girls are a fact, there are miscreants out there who exploit issues for funding fraud purposes and hurt the cause/case of so many. Please do your best to verify news before sharing #SunitaMasih,” he stated in a Facebook post. 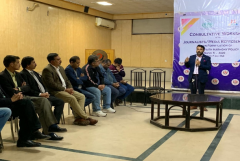 Sadly, such history keeps repeating itself in our country.

In March, my uncle shared footage of dead bodies in a church and called me about the incident. I explained that it was a mass shooting at St. Dominic's Church in Bahawalpur, Punjab, in 2001 by six assailants. I also requested him to avoid sharing such videos from WhatsApp University.

On May 26, a member of Sacred Heart Cathedral youth group shared a similar video in a WhatsApp group founded by the vice-president of the youth group in Lahore. This time it was Sarhadi Lutheran Church in Mardan, Khyber Pakhtunkhwa province, attacked by a mob in 2012.

The sender claimed it was St. Thomas Catholic Church in Chak 5 village of Punjab, which was at the center of an attack by Muslims on Christian villagers recently.

According to the Reuters Institute Digital News Report 2020, the coronavirus pandemic has increased the appetite for news in both legacy journalism (television, newspapers) and newer social media sites, especially Twitter and Facebook.

Sadly, most church-related news from Pakistan relates to persecution, violence, discrimination and forced conversions of minority girls, with authorities often failing to provide adequate protection or hold perpetrators to account.

Reportage with a genuine missionary aspect of living the faith in the Islamic republic only circulates in church offices and the drawing rooms of dedicated readers. Viral misinformation beats good news to the punch. There are many reasons for that.

Circulating old videos of church attacks can risk new ones

Most church offices use libraries as meeting rooms or a visitors’ area. Library memberships are non-existent. Video cassettes, holding precious church history, are gathering dust in those same cupboards. There is a general lack of interest in converting them to modern formats. Around the country, reading rooms and book rentals were lost in time. The custom of wrapping roti (small flat bread) in torn book pages and newspapers, despite warnings of cancers from the printed ink, is still dominant in our streets.

Amid the decline of reading in Pakistan, most millennials spend their time swiping their smartphones playing games or lost in the flood of content on social media. TikTok beats YouTube in popularity among young Christians. Cringe content satiates thirst for knowledge.

Fake stories like that of Sunita Masih endanger real victims of violence awaiting justice in Pakistan. The above-mentioned celebrities will think twice before stepping up for minority girls facing forced conversions. Both clerics and government commissions already label them as cases of consent. Rights groups are having a hard time in changing this mindset.

Circulating old videos of church attacks can risk new ones. In one of my articles penned in 2016, I tried to narrate how using social media for blasphemy accusations opened another front to attack religious minorities.

In his 2021 World Day of Social Communications message, Pope Francis urged the faithful to be critical and responsible for content both sent and received.

“All of us are responsible for the communications we make, for the information we share, for the control that we can exert over fake news by exposing it. All of us are to be witnesses of the truth: to go, to see and to share,” he said.