Festival illustrates the true, authentic expression of religious devotion in the Philippines 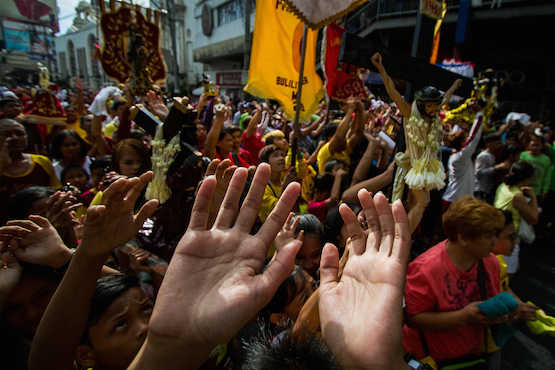 Thousands of devotees join the procession of replicas of the image of the Black Nazarene in Manila on Jan. 7. (Photo by Mark Saludes)

When Bernabe Madarang was a teenager all he wished for was to get rich. He made a vow to visit the image of the Black Nazarene in Manila every Friday until his prayer war granted.

Bernabe is now 56 years old and a father of five. His wish was never granted, but he continues his devotion to the charred image of Jesus carrying the cross.

He says he might not be rich, but he was able to raise his children with the help of the Nazarene, which is believed to be miraculous by devotees.

One of his children is now a teacher while another is a sales executive in the country's financial district.

Bernabe has sold candles outside the Minor Basilica of the Black Nazarene in Manila's Quiapo district for 23 years.

"I saw how strong the faith of the people was in the Nazarene," he says.

Monsignor Hernando Coronel, rector of the basilica, says the hundreds of vendors outside the church have become part of the centuries-old tradition of "celebration of faith and religiosity" of the Filipino people.

"When you say Quiapo or Black Nazarene, you will also think of the images and religious items being sold outside the church," says the priest.

"You know why there are lots of vendors? Because there are millions of devotees who look for things that will represent their devotion," says Monsignor Coronel.

Some of the vendors themselves are "hardcore devotees" who became vendors because of their faith.

"Perhaps, they realized that selling images of the Nazarene is another way of showing devotion, of practicing their faith," says the priest.

Every month, Monsignor Coronel gathers the vendors for catechism. "We just don’t let them sell, we also evangelize them," he says.

During the gathering catechists explain the significance of the religious items being sold.

"We also tell them that it is immoral to sell products that will harm the body, like herbs for abortion," says Monsignor Coronel.

The streets around the church are also known for stalls of herbs that are supposed to facilitate abortion, cure erectile dysfunctions, and other sicknesses.

Bernabe Madarang's wife, Rosie, arranges small replicas of the Black Nazarene at the stall outside the church in Manila's Quaipo district. (Photo by Mark Saludes)

Armi Cubinar was born with a hole in the heart. The doctors said she would not survive her childhood.

Armi's mother, Luming, a devotee of the Black Nazarene, dressed the young girl with a habit of the Nazarene — a long maroon dress fastened by a cord around the waist — and brought her to the church.

"I offer her to you, my Lord," said Luming as she raised her child while kneeling outside the church door.

She walked upon her knees to the altar, praying. "If it is your will, we give her back to you. If you will let her live, allow us to take care of her," the mother murmured.

For 15 year, Luming offered her daughter to the Lord.

"When I turned 15, I asked mother if I could stop wearing the habit when we go to church," says Armi. "The habit has to go, but the walking on our knees has to continue," she says.

The hole in her heart is still there, but she never had a heart problem. "It is really a miracle. I feel normal, as if nothing is wrong with me," says Armi.

She believes that the Black Nazarene gave her a lease of life, that he "patches the hole in my heart." She does not have any medication and is now a mother of two young girls.

To show her gratitude to the Lord, Armi's mother, Luming, set up the group "Offering of the Heart" that conducts prayer sessions and helps in church activities.

"It is how my mother wanted to show her gratitude to the Nazarene," says Armi.

The group, which started with 10 members, has now 350, most of whom are children and grandchildren of the original members.

Armi and her five siblings are all devotees of the Black Nazarene, a devotion that was handed down to them by their parents. A child sits beside a replica of the image of the Black Nazarene in Manila during an overnight vigil on Jan. 8. (Photo by Mark Saludes)

"[They] know that their devotion does not simply revolve in the forgiveness of sins," says Cornelio. "Most of us experienced a miracle or received gifts first before becoming devoted."

The Filipino Catholic’s "transactional devotion" is not individualistic.

"If we know someone from our family or from our friends, or neighborhood that experienced a miracle or received it, we claim it as our own," says Cornelio.

"That only shows how piety is related to kinship matter," he adds. He says devotion is not just religious, but is a "chain of memory."

"That’s why we teach or pass it to the children, not just the devotion but the memory with it," says the sociology professor.

The "sustenance of the devotion" to the Black Nazarene is "dependent on the experience of miracles from one generation to another," he says.

Monsignor Coronel says Filipino faith stories are "testimony to the actuality of God’s mercy, love, and of His Son."

"It is a validation that our faith is true, and that the devotion to the Black Nazarene of millions of Filipinos is authentic," he says.

"It is not fanaticism," added the priest.

"One doesn’t need to become an expert of the Bible to believe Christ. We just have to listen to the stories ... when they experienced God’s nurturing hands that touched them."