Faith Press: How to publish in China and stay open

Government censorship has remained a key challenge for publishing house 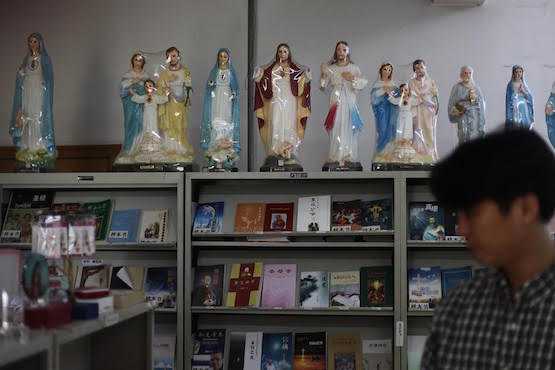 A shop sells Christian books, many of them published by Faith Press, in Shijiazhuang, Hebei province. The Catholic publishing house has produced books and newspapers in China for 25 years. (Photo by ucanews.com reporter)

How does a Catholic publisher of books and newspapers survive for 25 years in Communist Party-ruled China? When Faith Press became the country's first Catholic publishing house in April 1991, China was not yet 10 years into a religious revival after faith was all but banned under Chairman Mao.

The Tiananmen Square Massacre, less than two years earlier, was still fresh in the memories of many Chinese. China was freer than it had been under Mao but far from free. Religion and publishing were viewed by the party as two major threats to its monopoly on power, just as they are today.

That spring, Faith Press began printing Christian literature for nearby churches and their congregations from its office in smoggy Shijiazhuang, the provincial capital of Hebei province, nearly 300 kilometers southwest of Beijing.

In September of the same year, it launched Faith, a Catholic newspaper, now known as Faith Weekly, that was soon distributed to towns and cities across China.

Faith was distributed free of charge at first, and the publishing house began to translate and print Christian books that sold for as little as a quarter of the price of other titles on sale in China at that time as Faith Press openly stated its goal: to evangelize.

With no other competition, and literary products that were either free or very cheap targeting a growing Catholic community, Faith and its publisher's fast-expanding range of book titles proved a hit.

Faith Weekly mostly covers events designed to lift the spirits of China's estimated 8 to 10 million Catholics and educates about the Bible. It also sometimes hints at the moral void in China's rapidly changing society.

In 2011, the paper offered a Christian angle on a story that appeared across Chinese media, causing outrage among the wider public when two-year-old girl Wang Yue was run over by two vehicles and then ignored by at least 18 passing pedestrians before anyone helped. She later died in hospital.

Government censorship has remained a key challenge for Faith Press. While the Chinese government doesn't operate a censorship board that strikes red marks through themes that run counter to its narrative, it does send out regular written orders to media not to publish certain sensitive topics.

Most censorship in China is conducted by editors themselves who know they may be suspended, fired, fined or be responsible for their publication being closed if authorities don't like what they read.

On Dec.13 last year, an estimated 10,000 underground Catholics from as far away as Beijing celebrated Sunday Mass at the state-approved church in Zhengding in an event described as a "miracle" by laymen at the church.

Bishop Julius Jia Zhiguo celebrated the Mass that day despite refusing to join Beijing's state-approved church, the Chinese Patriotic Association, prompting Hebei authorities to place him under house arrest. It remains unclear why police, always stationed at the church gate, did nothing to stop the event.

Although its office is just a half-hour drive from the cathedral, Faith Weekly did not cover the Mass. Its front page instead featured a tribute to a deceased priest, an article that spilled over to pages two and three of its four-page edition on Dec. 17, four days after the "miracle" Mass in nearby Zhengding.

The paper doesn't skirt sensitive church issues entirely. The Dec. 17 edition front-page article noted China's church opening up in the early 1980s, albeit without mentioning the religious persecution under Chairman Mao. And on page 3 ran a photo of St. John Paul II, who as pope remained critical of China's communist government as Beijing and the Vatican failed to formalize ties.

The enduring detente between both sides has remained among the biggest challenges facing Faith Press. In practice, its newspaper and many books are not able to acknowledge in print detained clergy who have refused to accept state control of the church or underground Catholics who follow suit.

It's just one of the many balancing acts facing a Catholic newspaper that has survived and even flourished in China amid profound change over the past 25 years, very little of it political.

When Faith Press celebrated its 15-year anniversary back in 2006, founding priest Father Zhang Shijiang hinted at the many obstacles — and the balancing act — required to publish China's first national Catholic newspaper.

Speaking at an event that doubled as the first Christian media conference held in mainland China during Communist Party rule, Father Zhang made a comment that alluded to how the newspaper was permitted by authorities in the first place.

"Dear friends, this celebration and conference — especially the various kinds of church publications, newspapers, magazines, periodicals, electronic products and so on — are a convincing and powerful proof of the continuous implementation and carrying out in recent years of the policy of free practice of religion in China," Father Zhang told his audience including priests, government officials and visiting scholars.

"Of course, it is undeniable that, due to the period of transition in which China finds itself, there are still many problems of different kinds, including shortcomings and flaws," Father Zhang continued. "Nevertheless, we treasure the precious stable environment we are blessed with, and feel contented with the bountiful yield we have harvested."