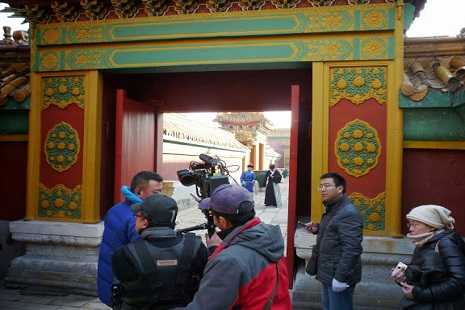 With its sprinkling of graffiti and grey, decades-old façade, the head office of Kuangchi Program Service (KPS) looks anything but the home of a pioneer. Yet by religious broadcasting standards, this Jesuit television studio in central Taipei – now 56 years old – remains light years ahead of the pack when it comes to gaining entry to the world’s most populous nation. KPS takes a softly-softly approach with China, and it’s about to do so again.

CCTV, the world’s biggest television broadcaster, will then beam the series into hundreds of millions more Chinese homes “probably around the end of this year,” says KPS Vice President Jerry Martinson, a Jesuit priest from California.

On the surface, Kuangchi’s foothold in China makes little sense. A Catholic TV studio in Taiwan, a country technically still at war with China, KPS makes programs about missionaries screened by two Communist Party broadcasters in a country labeled “repressive” by Christian Solidarity Worldwide and with “the world’s most sophisticated surveillance system” by media freedom watchdog Reporters Without Borders.

“In Taiwan and China everything happens through relationships,” says Martinson, a fluent Mandarin speaker.

In the mid-1990s, Martinson – then Kuangchi president – teamed up with Giraffe, an English school in Taipei, making learning programs in the KPS studio basement, the Californian starring as host.

Switching between American English and near-perfect Chinese, Martinson taught in a way that was more sermon than lesson, which was dubbed ‘Uncle Jerry’s English.’ With plans to broadcast inside China, religious overtones were kept well below the surface.

“Church you could say, as long as it’s a church or a concrete building (not the institution). Jesus, yeah, we probably wouldn’t. It would have to be an indirect reference. Basically we used Gospel stories or parables or things like that but we didn’t sign Jesus’ name. And actually, I don’t think Jesus minds,” says Martinson, chuckling.

Courtesy of a relationship forged by Giraffe, Martinson had become a TV star by the late 1990s. His all-American good looks and closely cropped brown hair was a regular feature over 15 years on new Hong Kong-based Phoenix Television, one of the few private broadcasters permitted entry to China.

Set up by billionaire Liu Changle, a post-Cultural Revolution broadcast journalist, and Rupert Murdoch’s News Corp subsidiary Star TV based in Hong Kong, the broadcaster from the outset shunned politically sensitive news in favor of entertainment. By Phoenix standards, Martinson and his English program was risqué; by Chinese standards, it was unprecedented.

“I don’t know of others trying to get their broadcasts in [to China] the way Jerry and his team has done,” says Augustine Loorthusamy, Asia head of SIGNIS, the global Catholic association of media professionals. “He learnt well from the ‘Uncle Jerry’ series and found that was the way to ‘evangelize.’”

Martinson says he had never wanted to teach English. He had plans to make documentary films, and for years hoped to shoot a feature on the pioneering Italian missionary Matteo Ricci, the first Westerner to enter Beijing’s Forbidden City in 1601. For years, Martinson was rejected by his Chinese partners. “It was against the law in China,” he says.

But then “somebody” – Martinson doesn’t say who – “had the bright idea” to pair Ricci’s story with that of Paul Xu Guangqi, a Christian convert and friend of Ricci who through the Italian brought Western geometry to China.

By focusing on the Chinese and downplaying the foreigner, suddenly Kuangchi was able to shoot a film about Ricci for a Chinese audience, a first.

“I asked the head of Jiangsu Television at that time: Well, you know, our programs they do have a religious element, won’t they be censored by the government?’ She said: ‘We are the government,’” says Martinson, grinning. “Which was true, they were part of the provincial government.”

Screened on Chinese television in January, 2006, this series of four roughly 25-minute segments focused more on the cultural and scientific than the religious. There was no mention of anything remotely Christian until nearly eight minutes into the first episode, and the first Jesus reference did not come until 18 minutes in.

Perhaps the most explicitly Christian section was an interview inside the Jesuit Archives in Rome about a bone relic of Ricci, its significance explained by “what he did to China, and for China and for the society of Jesus.” Ricci’s conversions of Ming dynasty officials were alluded to but conveniently left out.

CCTV, which broadcast the series later, was stricter with its editing than Jiangsu, says Martinson, and although China’s national broadcaster later made its own Ricci program by a Chinese Christian director, it also suffered at the hands of the censors before screening.

Either way, KPS was a pioneer, says Loorthusamy: “Imagine a program like this being shown in mainland China. The way it was done was most subtle and subliminal.”

Kuangchi waited for a sign from the very summit of Chinese Communist power before it went ahead with its second missionary film, the story of 17th century German Jesuit Johann Adam Schall von Bell. During a state visit to Germany in 2005, President Hu Jintao noted Bell’s “significant contributions” to China’s efforts to align its calendar with that of the West. KPS took it as a green light.

“By saying that publicly, he more or less baptized Adam Schall,” says Martinson. “So we got together with Jiangsu TV and said: ‘Now I think we can do a program.’”

First screened in China on CCTV in March 2009, the film again stuck to the relative safety of science and cultural exchange, documenting Bell’s feats of astronomy and mathematics rather than his promotion of Christianity. Bell's imperial connections were the practical means by which the ordinary work of evangelization could happen across China without suppression. In his time an estimated half million Chinese were baptized.

“It was interesting because in each of the programs they always portray Matteo Ricci and Adam Schall as friends of China, people that made great contributions to China, they really opened China to the Western world,” says Martinson.

The narrative fitted well into the government’s official line of recent years that China is happy to receive the rest of the world, he adds, a discourse that was central to the Beijing 2008 Olympic Games.

“And it works fine for us because the people watch somebody who has sacrificed a lot and failed to some extent. It creates great sympathy on the screen,” says Martinson.

When Chinese audiences watch the Castiglione film later this year, they’re in for another story of woe, he says. Again, the timing has been carefully calculated.

The film ties in with the Chinese year of the horse through Castiglione’s hybrid east-meets-west-style paintings which enchanted 18th century China. The Italian Jesuit missionary’s most famous work, the 7.7-meter long scroll ‘One Hundred Horses’ – stolen from the Forbidden City by the fleeing nationalists when Chairman Mao won China in 1949 – is copied from the original housed in Taipei’s Palace Museum and shown on screen by KPS.

In China, the canvass is famous and considered a stolen treasure yet in Italy Castiglione remains little known. KPS hopes that will change with a tie-up that will see the film screened next year at the Milan Expo 2015, a global cultural event hosted every five years by a different city, the last being Shanghai in 2010.

“What we want to do – if possible – is to build a bridge, a relationship between Castiglione’s time and ours, something that will help us connect with the past,” JBC Director Gao Wei says in a recently released video interview promoting his forthcoming film.

The project achieves very different goals for everyone involved, says Emilio Zanetti, a Milanese priest brought in by KPS as a consultant to help organize shooting in Italy, fund-raising and connect the project with the expo in Castiglione’s home town Milan.

Chinese entrepreneurs and the government have committed to funding the China section of the expo as a showcase for the country’s culture. With Castiglione there are strong allusions to Chinese treasures which remain in overseas looters’ hands, the ‘One Hundred Horses’ included.

“Of course, the main interest is about his art, since they are trying to recover all the art belonging to China from everywhere,” says Zanetti.

There was though a curiosity during shooting in southeastern Zhejiang province and Italy that may have extended to Christianity, he adds. “I noticed that, especially among younger people, either in the TV crew or in the staff at the palace museum or at the office for foreign affairs.”

Zanetti puts it down to Chinese perhaps wanting to understand more of the background of Castiglione, a religious figure that made such a mark on Chinese art. But what of the religious exposure the film is expected to create as it reaches millions of Chinese homes later this year?

It’s a question which drives at the very heart of what Kuangchi has aimed to achieve since it started as a radio broadcaster back in 1958. Whether KPS is preaching to the converted or its message remains too diluted to realize its evangelizing goals remains difficult to say. For Martinson, the point is that Kuangchi’s content exists in China, and continues to go further all the time.

“The whole purpose is to bring these values to the people of China, no doubt about it,” he says. “If we could, and I hope in the future we can, we want to tell some of the other stories because the real growth of the church in China happened at the grass roots. But we can’t do that yet.”