Faith and resilience sustain poor in the Philippines 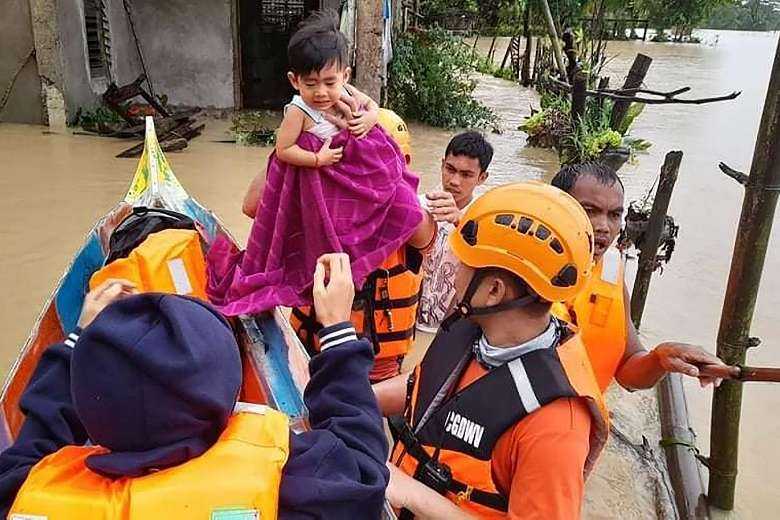 Tropical Storm Agaton (Megi), the Philippines' first tropical cyclone in 2022, has caused massive flooding and landslides, leaving a trail of death and destruction in Leyte, Samar, Capiz and other provinces in the Visayas.

The storm caused major landslides that pushed mud over villages in Leyte, burying around 210 houses and displacing 2 million residents. The death toll has reached 179, according to the National Disaster Risk Reduction and Management Council. Samar and Leyte provinces have recorded 151 deaths.

Abuyog mayor Lemuel Traya told reporters that emergency personnel were focused on the difficult task of retrieving bodies, although he said, “To be honest, we are no longer expecting survivors.”

Ranked among the most vulnerable countries to the impacts of the climate crisis, the Philippines is ravaged by an average of 20 storms every year.

How do people move on and overcome the despair caused by death and destruction after every harsh encounter with nature’s wrath? Faith. It’s faith that sustains them. Because they are people of great faith, Leyteños, Samareños or Waray-Waray persevere even in the face of the worst trials and tribulations caused by natural disasters.

In his 2015 visit, Pope Francis himself hailed the people of Leyte and Samar for their resilience and strong faith as they recovered from the devastation of Super Typhoon Haiyan that struck the provinces in 2013, affecting 14 million people, including over 6,000 deaths and over 4 million displaced.

One of the roles of faith is to build up resilience during a time of crisis. Crisis tests Christians and develops in them a stronger faith in God, like shining gold tested by fire.

Because they believe that God is bigger than all their problems, Filipinos have become resilient. Faith makes the typhoon victims and survivors light a candle rather than curse the darkness as they rehabilitate themselves and move on.

Alay Kapwa, which roughly translates as an offering of self to one’s neighbor, is a resource mobilization program of the Church created 47 years ago by the Catholic Bishops’ Conference of the Philippines (CBCP).

After three years of martial law under the Marcos dictatorship, 1975 became a critical moment in Philippine history when the Catholic Church decided to address increasing poverty and injustice.

Apparently, militarization was invented to cover up cronyism, kleptocracy and nepotism that somehow looted the public coffers dry. American professor Robert Youngblood, author of Marcos Against the Church (Cornell University Press, 1990), and other observers thought so.

When in 1975 the CBCP launched the nationwide Lenten Action Program, the bishops asked the faithful “to look around and identify our neighbor: Who are the people who mostly need our help?”

Since 1975, Alay Kapwa has long served as a vessel of pastoral and material assistance to support the social services, relief/rehabilitation operations, emergency responses and other humanitarian efforts of Caritas Philippines

From this awareness of poverty, homelessness and hunger, the bishops continued to challenge every believer: “What should I do about this? How can I share with my neighbor God’s gifts to me — my time, my talent, my treasure?"

Alay Kapwa then became synonymous with sharing in joy. According to the 1975 CBCP statement, “it is in giving that we receive ... in dying that we are born to eternal life. Lent culminates not on Good Friday but on Easter Sunday — not in death but in the resurrection!”

Since 1975, Alay Kapwa has long served as a vessel of pastoral and material assistance to support the social services, relief/rehabilitation operations, emergency responses and other humanitarian efforts of Caritas Philippines on behalf of those who suffer during natural disasters and human-caused calamities like the Typhoon Haiyan in 2013, Taal volcano eruption in 2020, Typhoon Odette in 2021 and Storm Agaton in 2022.

A case in point is the Diocese of Marawi, whose Bishop Edwin de la Peña very recently sent Alay Kapwa collections to Caritas Philippines. He reminded the constituents of Marawi destroyed by war in 2017 that “prayers are praiseworthy, but more must be done because typhoon victims need food to survive another day while bracing for another calamity.”

Their Alay Kapwa contribution was not that much “considering our being a small Christian community,” the good prelate said, “but what counts is the spirit behind it. My neighbor is my responsibility (Kapwa ko, pananagutan ko).”

Last year the Archdiocese of Palo sent a check donation and relief goods to Bishop Prescioso D. Cantillas of the Diocese of Maasin in Leyte after the onslaught of Typhoon Odette. Storm Agaton hit the same diocese again.

Charity demands that we give without counting the cost and without expecting anything in return. Charity pushes us to reach out to the lost, the last and the least, and make this world a bit better

We recall that Pope Francis has donated 100,000 euros (US$108,000) as initial financial assistance for the victims of Typhoon Odette.

Financial assistance also came from some families in Capiz, Leyte, Samar and other nearby provinces whom God has blessed financially over the years. These families became successful in life but they did not raise their standard of spending. They raised their standard of giving and sharing with those with less in life.

In addition to Alay Kapwa's annual collections, Caritas Philippines, through its provincial network, regularly receives donations from big and small companies. Among all institutions in the Philippines, the Catholic Church enjoys the highest public trust level and credibility, as revealed by the Philippine Trust Index (PTI).

According to the 2017 and 2021 PTI surveys, titled "Rise & Respond," 80 percent of Filipinos trust the Catholic Church the most, more than they trust the government and politicians.

Caritas Philippines is driven by charity, the greatest of the three theological virtues — faith, hope and charity. Charity demands that we give without counting the cost and without expecting anything in return. Charity pushes us to reach out to the lost, the last and the least, and make this world a bit better.

Remember, the first Easter marked the genesis of a whole new world, a new beginning of universal brotherhood and sisterhood, visible in a radically empowered community and changed attitudes. It was a joyful moment in human history when Christian faith, hope and charity spread rapidly — when no one was sad or hungry and when all were healed, both spiritually and physically.

* Jose Mario Bautista Maximiano is a Catholic scholar, educator, management adviser and author of 'Catholic Social Teachings in CONTEMPORARY Philippine History: 500 YOC (1971-2021), Volume Three' (Claretian, 2022). The views expressed in this article are those of the author and do not necessarily reflect the official editorial position of UCA News.