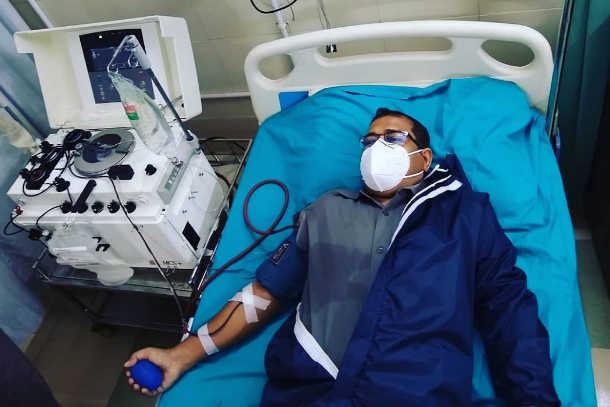 A Catholic doctor in Bangladesh who battled successfully against deadly Covid-19 has credited his strong faith in God and unwavering hope for his recovery.

“Hope is a gift from the Holy Spirit and I always hanged on to hope. At a time of any massive crisis, we must have complete faith and hope in God so that we can overcome it,” Dr. Edward Pallab Rozario told UCA News.

Rozario, 47, head of health programs at Catholic charity Caritas Bangladesh and a former secretary of the Catholic Bishops’ Healthcare Commission, caught the virus in late April.

The father of three suspects he was infected while treating patients as a visiting doctor at a Christian hospital in capital Dhaka. Some patients had a mild fever and were coughing and had been admitted after several hospitals turned them away fearing Covid-19.

“The hospital kept their doors open to serve people and was generous to support them, though it was a bit risky. Our objective was to serve people in a time of great crisis. We looked at what Jesus did in his time and healed people from sickness with love,” Rozario said.

Later, some of the patients were confirmed to have Covid-19, and Rozario, fearing a potential infection, was tested on April 25. The result on May 1 showed he was positive.

The physician was concerned about his family — his elderly mother, wife and three sons. He started living in complete isolation for two weeks.

Maintaining physical distancing from family members was tough, especially because of the children.

“As they didn’t have any idea about the dangers, it was hard to convince them to stay away. They have never seen me locked inside a room. They used to come and knock on the door, wanted to see me and talk to me. They left disheartened,” Rozario said.

His elderly mother became upset and started praying to God continuously for his recovery. Besides, his relatives, friends, colleagues and well-wishers, including some from abroad, prayed for and encouraged him to stay strong.

Starting with a mild fever for the first few days, Rozario suffered from acute diarrhea that sent him running to use the toilet every 2-3 minutes, which continued for days. He didn’t have other symptoms associated with Covid-19 including throat pain and respiratory problems.

“I became weak but I didn’t get upset. After using the toilet every time, I took saline orally and my wife also prepared rice, so I was able to replace what I had lost,” he said. Dr. Rozario with his family and Bishop Shorot F. Gomes of Dhaka on the day of the baptism of his youngest son on Dec. 14, 2019, at Holy Rosary Catholic Church in Dhaka. (Photo supplied)

To stay connected with the outside world, he went online and got in touch with several doctors’ forums and shared his ordeal. Many expressed their concern, prayed and encouraged him to stay strong.

Even during his sickness, he continued offering medical advice by phone and online.

“I was offering advice to 30-40 people a day. My mother and wife asked why I did it as I was sick. I told them I had to offer help to people who cannot go outside or visit doctors during the lockdown. In fact, it helped me pass my isolation period usefully and overcome boredom,” he said.

Once Rozario overcame diarrhea, he started using antibiotics, which improved his health further. He was tested twice in the first and second week of May, with both tests coming back negative.

He left isolation after 14 days and his family were overjoyed. They disinfected the isolation room and his belongings and his mother, wife and children were tested. All tested negative for Covid-19.

He has already returned to work and is visiting patients, but he is taking more precautions by maintaining a physical distance and using masks and gloves.

On May 26, Dr. Rozario donated 600 milliliters of plasma at state-run Dhaka Medical College Hospital so that his antibodies contained in it could be used to treat at least three Covid-19 patients.

“My family were not willing to let me go because the hospital already had many Covid-19 patients and I had just recovered. I told them it was a humanitarian issue which could save some lives,” he said.

Rozario noted that hospitals were struggling to get plasma as most recovered patients are afraid of donating it.

His victory over Covid-19 would not have been possible without his strong faith in God, he believes.

“I was born into a devout Catholic family and I have always had full faith and trust in God as well as in Jesus, Mother Mary and Joseph. While relatives, friends, colleagues and well-wishers prayed for my recovery, we also prayed every day through online apps at home. It gave me so much strength and I never lost hope. The crisis has brought us closer to God,” he said.

Rozario also read the Bible, attended online liturgy including livestreamed Masses and sought inspiration from religious texts telling him about how pandemics struck humanity before and how God saved people.

“I strongly believe God will help us overcome this great crisis and humanity will start all over again,” he said.

Rozario suggests that people should not lose hope in times of such crisis. “This pandemic is not all about disasters. It is also a time to evaluate our life and work, to find out weaknesses and overcome them,” he said.

Bangladesh has recorded 52,445 Covid-19 cases and 709 deaths, with about 12 percent of those infected being doctors and medical staff, according to government data.