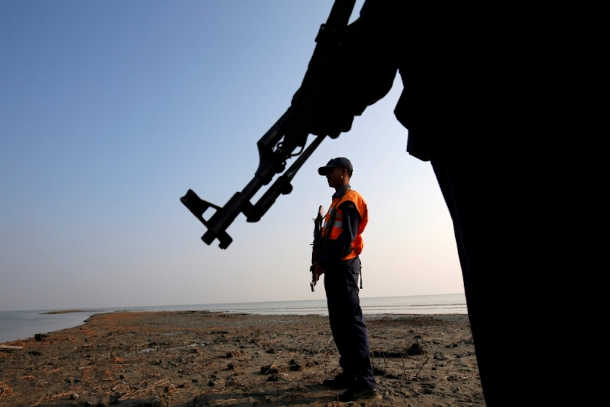 The scourge of extrajudicial killings has become commonplace in South Asia. (Photo supplied)

A group of rights activists defied the scorching sun on Aug. 3 and took to a busy street in Bangladesh’s capital Dhaka to stage a silent protest, holding placards to demand an end to the reign of extrajudicial killings in the country.

“Is Bangladesh a crossfire state?” read one placard.

“Crossfire” is a common euphemism for extrajudicial killings by law enforcers in Bangladesh. Other terms including "encounter," "gunfight" and "fire-in-self-defense" have a similar meaning.

The activists were enraged over the latest and one of the most talked about extrajudicial killings in Bangladesh in recent times.

On July 31, a police officer shot dead Sinha Mohammad Rashed Khan in Teknaf in Cox’s Bazar district. Khan, 36, was a retired army major who once served as an officer of the Special Security Force that provides protection to top government officials including the prime minister and foreign dignitaries.

Police said the firing was in self-defense as Sinha pointed his gun when police sought a routine inspection of his vehicle and asked him to come out at a checkpoint. Police also allegedly found drugs in the car including 50 pieces of yaba (methamphetamine), a drug produced in Myanmar.

On numerous occasions, law enforcement agencies have presented similar stories of firing in self-defense and possession of drugs after crossfire deaths. It is a too common story in Teknaf, a beautiful coastal area just across from Myanmar and close to Rohingya camps sheltering over one million refugees.

In recent years Teknaf has become a place of world attention as the crossing point for one of world’s largest refugee exoduses in modern times. It is also a hotbed of crimes including robbery, drugs and human trafficking, to mention a few.

Teknaf came to national attention for a heavy crackdown on crimes with the quick justice method of crossfire. Since 2018, police and border guards have killed 212 alleged criminals for robbery and drug peddling, which is about 20 percent of the total extrajudicial killings in the country in that period, according to rights group Odhikar (Right).

Odhikar reports that 4,002 extrajudicial killings have taken place in Bangladesh between 2001 and June 2020, which includes 1,015 cases since the start of the 2018 anti-drug crackdown in the style of Filipino president Rodrigo Duterte. The crackdown triggered a national and international outcry.

Not all cases are related to drugs or trafficking, and there are many cases of extortion and politically motivated contract killings. Probes and justice have been rare so far.

In 2017, the High Court upheld the death sentence against 15 people including three ex-officials of Rapid Action Battalion (RAB), an anti-terror police unit, for murdering seven people in Narayanganj district near Dhaka in 2014.

The scourge of extralegal killings has become so commonplace in Bangladesh that many people either swallowed police versions of the stories or even cheered on such quick justice.

In the latest case, it didn’t work out as Khan’s brief but illustrious military career was well known. His death triggered an unprecedented public and media backlash, forcing the suspension of eight police officials including Teknaf police chief Pradeep Kumar Das, a dreaded officer accused of ordering some 150 crossfires in recent years. They are now facing a murder charge filed by Khan’s family.

It seems the wheels of justice might be moving finally, albeit slowly, in this particular case. No one knows what will happen to hundreds of other such cases. In all probability, those cases will be forgotten.

The cry of a daughter

One case of a tragic extrajudicial killing, which also occurred in Teknaf, still saddens many people in Bangladesh.

On May 27, 2018, RAB forces detained and shot dead in crossfire Ekramul Haque, a councilor of Teknaf municipality and a ruling Awami League politician, after accusing him of being a top drug trader, which his family and relatives denied.

His wife Ayesha Begum circulated four audio clips to journalists that recorded Haque’s final mobile conversations with her and one of their two young daughters. The clips also recorded the sound of gunfire and the groans of the dying man. Ayesha and her daughter screamed and begged for his life.

The tragic cry of his daughter, “Abbu tumi kantechho je?" (Daddy, why are you crying?), was not enough to melt the hearts of government high-ups to order a proper probe and justice for Haque. The killing sparked a media and social media outcry, but justice is still a long way from being delivered.

In addition, there have been more than 500 cases of enforced disappearances in Bangladesh, according to rights groups.

While the government attempts to justify extralegal killings and disappearances to hide the failure to ensure proper justice and punishment, wider society seems to have accepted the menace of so-called summary justice.

That’s the tragic part of the story, and it can be degenerating for ordinary people. In 2019, about 50 people were brutally killed in mob beatings in Bangladesh due to rumors over child kidnapping. The phenomenon was nothing but “reproduction of brutalities committed by the state” for years, a critic noted.

A similar pattern in South Asia

Extrajudicial killings and enforced disappearances are common forms of human rights violations in South Asian countries including Bangladesh, India, Pakistan and Sri Lanka, where democracy is fragile and politics is dominated by authoritarianism.

In India, hundreds of alleged criminals have been killed in police shootouts, popularly called "encounters," in almost every state. The menace is largely accepted by society, and in literary arts like cinema rowdy policemen are hailed as heroes for eliminating criminals in shootings in broad daylight.

Before, during and after the 26-yea Sri Lankan civil war, hundreds of political, social and rights activists became victims of extrajudicial killings and disappearances, according to Asia Legal Resources Center. As the Sri Lankan government is uncomfortable and unwilling to allow a UN-mandated probe into war crimes during the civil war, it is palpable why it would try to forget extrajudicial killings.

Pakistan, ruled by the military for most parts of its history since 1947, has one of the highest rates of extrajudicial killings. From 2014-19, more than 4,200 people were killed in armed encounters with police, says the Human Rights Commission of Pakistan.

Apart from the interventions of international watchdogs like Human Rights Watch and Amnesty International, there is little outcry against the scourge of extralegal killings. The UN and the international community largely turn a blind eye.

The Church strongly opposes the death penalty, but except for a few cases church officials don’t raise their voices against extrajudicial killings and disappearances, whether in Bangladesh, South Asia or other parts of the world.

Civil society groups including the media are often too timid and cowed to take a strong stance against such gross violations of human rights, which are also unconstitutional and dehumanizing.

Extrajudicial killings are unacceptable in a modern world because they are a disgrace for a civilized society and legal system. Everyone has a moral obligation to denounce such brutality or we are also part of this collective crime and failure.