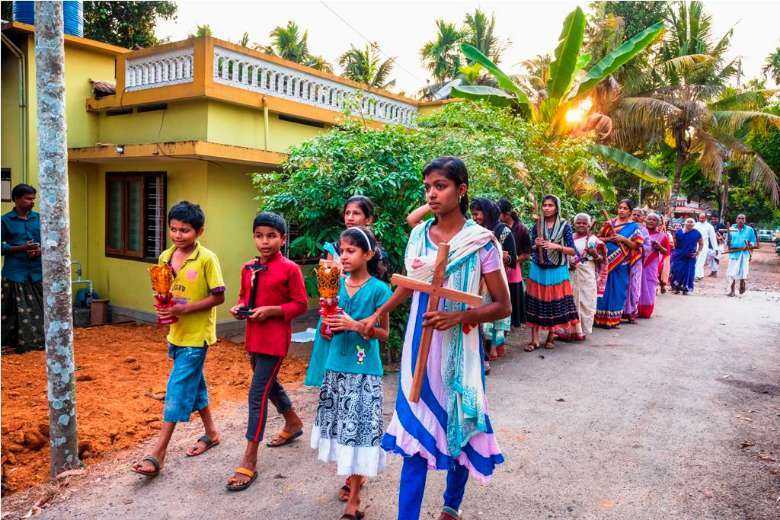 Christians in a religious procession in Kumarakom in the southern Indian state of Kerala. (Photo: AFP)

Catholic bishops want Christian families in Kerala to have more children after the national census recorded a drastic decline in the community’s population in the southern Indian state.

“Fifty years ago Christians in the state accounted for one-fourth of the total population but now we are on a drastic decline,” Father Jacob G. Palackappilly, deputy secretary-general of Kerala Catholic Bishops' Council (KCBC), told UCA News.

“If this trend continues, the day is not far off when the Christian community will face a threat of extinction in the state.”

The KCBC at an online meeting last week emphasized the need for promoting large Catholic families and asserted the pro-life stand of the Church.

However, they agreed with the government’s policy to control the population in the country.

Christians are a minority constituting only 2.3 percent of India’s population

“The bishops’ call for large Catholic families should not be construed as a challenge to the national population policy. It is for the sake of a community that is on a decline,” Father Palackappilly said.

India is a country of more than 1.3 billion people and the federal and state governments are engaged in finding ways to discourage large families.

Christians are a minority constituting only 2.3 percent of India’s population. In the coastal state of Kerala, they make up over 18 percent of its 33 million people.

Pala Diocese of the Eastern-rite Syro-Malabar Church recently announced a slew of welfare measures for Catholic families having four or more children after directions from the Vatican to observe 2021 as the Year of the Family.

The diocese pledged 1,500 rupees (US$21) every month to couples married in 2000 or later and having four or more children as well as assistance in higher education for the fourth and subsequent children.

The diocese also promised to bear the complete delivery expenses of the fourth and subsequent children at its hospitals.

The announcement, however, provoked severe criticism from members of the public and social media platforms, who perceived it as the Church taking a stand against the stated policies of the Indian government.

However, the criticism did not deter a few other Catholic dioceses from making similar announcements for the welfare of their families.

Now the KCBC wants every diocese and parish in the state to adopt the pro-life stand of the Church and engage in a meaningful way to encourage Catholic couples to have more children.

The bishops said they had always supported governments in the past on population control, but “now the situation is different.”

They also highlighted the dangers of strict population control policies, citing the examples of China and countries in the developed world facing serious manpower shortages.

We see financially sound families with only one or two children. But the bishops' concerns are very genuine

But the declining Christian population in a literate state like Kerala has its own reasons.

“Many migrate to foreign countries for employment and never return. Some get married but do not prefer to have more children, while others decide against having any children due to financial and social constraints,” Jose Joseph, a catechism teacher in Kerala, told UCA News.

He feels the Church’s overtures will do little to change the younger generation of Indians who do not favor large families.

“We see financially sound families with only one or two children,” he said. “But the bishops' concerns are very genuine.”

He underlined the need for more awareness and encouragement for the new generation to change their attitude and adopt bigger families.

“It might help contain the decline in our population,” Joseph said.