Filipinos told a sprinkling before bed will keep demons at bay An exorcist from the Vatican told Filipinos during a visit to Manila over the weekend that sprinkling holy water over themselves before going to bed would fight nightmares.

Father Joseph Iannuzzi, a theologian and assistant of Diocese of Rome exorcist Fr Gabriel Amorth, said "any sense of fear or anxiety is an evil spirit," and thus can be fought with holy water.

He paraphrased St Peter, saying "the devil roams the earth, looking for someone to devour" as he advised Catholics to also sprinkle their homes with holy water if they experience "strange happenings."

“The devil has been able to roam undetected even to the point that we don’t believe he exists,” Iannuzzi said during a talk in Manila on Saturday.

The priest, who is also an accomplished violinist and wrestler, said that one can also use other "sacramentals," such as exorcized oil, salt, scapulars and the Benedictine cross to ward off evil.

Iannuzzi, who is in the country for a series of talks, said Catholics should go back to using sacramentals or "sacred objects, actions or blessings" that communicate grace to believers through the prayers of the Church.

He warned however against overdoing these "holy practices."

"I’m not saying be scrupulous, [like] if anyone bothers you, throw [holy water] in their face,” the priest said.

For those who do not see any effect when using "sacramentals," Iannuzzi said the proof of its power "is precisely that nothing happens."

"This is what is keeping your family safe, believe it or not." 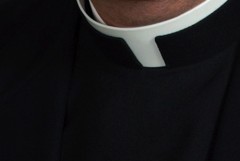 An insight into the life of a Catholic exorcist priest Iannuzzi has been assisting Amorth, an Italian exorcist who claims to have already cleansed tens of thousands of demonic possessions.

The Vatican said in a statement however that the pope "simply intended to pray for a person who was presented to him."

Amorth countered that "it was a real exorcism."