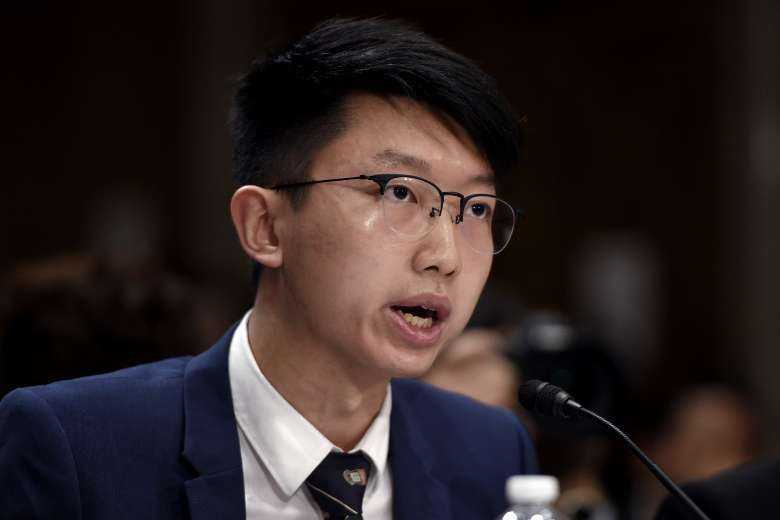 Prominent Hong Kong democracy activists who fled overseas are calling for residents to boycott upcoming legislature polls, defying a new law that criminalizes incitement — even for those based abroad.

Hong Kong's political elite will select a 90-seat lawmaking body on Dec. 19 under a new "patriots only" system imposed by Beijing after huge and often violent democracy protests two years ago.

Only 20 seats will now be directly elected — down from half the last time polls were held — while all those standing for office must first be vetted for their patriotism and political loyalty.

Most of the city's traditional pro-democracy opposition figures have been jailed, barred from standing, declined to take part or fled overseas.

"Hong Kongers should not endorse the autocratic regime and help the regime to pursue a pseudo-democratic veil," Sunny Cheung, a prominent 25-year-old activist currently seeking asylum in the United States, told AFP.

"This is a deal with the devil. Under the reform and its stringent political screening, no authentic democrats can be elected without kowtowing to Beijing."

Alex Chow, a well-known former student leader who served jail time for spearheading democracy rallies in 2014, said it was a "no-brainer" to stay home.

"Hong Kong voters should boycott the election because it is a way to protest against the government," said Chow, who is also now in the United States.

Despite their absence, they maintain large online followings and have become vocal international lobbyists at a time when many critics who remained are being prosecuted.

"This is a selection, not an election," Law told Britain's Sunday Times earlier this month.

Law is speaking at US President Joe Biden's democracy summit on Dec. 10, a move that sparked China's state-run Xinhua to label him a traitor who will be "crucified on the pillar of historical shame".

Hong Kong's government recently made it an offense to encourage people to boycott elections or incite them to cast blank or spoiled ballots.

A spokesperson for the ICAC, Hong Kong's anti-corruption watchdog, told AFP that the law applies "whether the conduct is engaged in within Hong Kong or elsewhere".

That law does not make it illegal for individual Hong Kongers to void ballots or refuse to vote.

Authorities have tried to quash calls for a boycott this year, even those made overseas. Last week the ICAC said it would seek an arrest warrant for Hui for social media comments endorsing a boycott. Three others have been arrested within Hong Kong.

The head of the ICAC also warned pollsters that even asking the public if they intended not to vote could breach the law.

What's the point of having a so-called democracy if people are suffering, as you can see in some Western democracies in the course of fighting Covid-19

Xia Baolong, Beijing's most senior official tasked with Hong Kong policy, declared in a speech on Dec. 6 that the Dec. 19 polls were "a vote of confidence in 'one country, two systems'". That phrase is the model China uses to allow the former British colony some level of autonomy.

"What's the point of having a so-called democracy if people are suffering, as you can see in some Western democracies in the course of fighting Covid-19," she said on Dec. 7.

Polling suggests turnout could be at record lows, which would be hailed by the activists as a victory in voicing opposition to how Hong Kong is being run.

Thirt-two percent of respondents to a recent survey by research group HKPORI said they definitely planned to vote, while 26 percent said they would definitely boycott.

The last time legislature polls were held in 2016 the turnout rate was 58 percent.