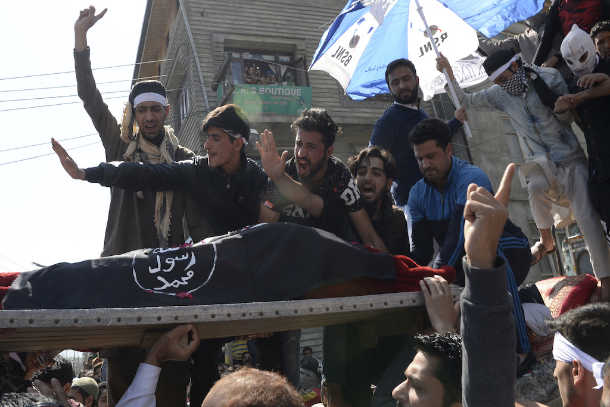 The body of Kashmiri civilian Kaiser Bhat is carried wrapped in a flag of the so-called Islamic State during his funeral in Srinagar on June 2. Bhat was hit by an Indian paramilitary vehicle during clashes on June 1. Islamic State has a growing presence in Kashmir. (Photo by AFP)

Imitating Islamic State (IS) terrorists, Islamic militants in India's Muslim-dominated Kashmir region have begun executing their opponents, filming the acts with intimidating messages and spreading the videos on the internet.

On Nov. 15, eight young men were abducted by militants from various parts of Kashmir. Nadeem Manzoor, 17, and Hufaiz Ashraf, 19, were found dead in an orchard the next day.

Their executions were recorded on video and immediately went viral on social media, sparking concern among security agencies that IS is gaining a foothold in Kashmir, where militants want to free the region from Indian rule.

In one video, a man wearing a black gown with his face covered is shown slitting the throat of Ashraf with a sharp knife. He then turns toward the camera and warns of a similar fate for anyone informing security forces about militants' presence.

In another video, Manzoor is ordered by militants with faces covered to move his face toward another direction as they assure him that he wouldn't be killed. They then pump a volley of bullets into his body while chanting Islamic prayers. The militants then turn toward the camera and warn parents not to allow their children to work for the army.

Pakistan-based militant outfit Hizb-ul-Mujahideen has claimed responsibility for the killings.

Police said the executions represented a new stage in the militancy that began in the region in 1990.

"Probably for the first time in the history of terrorism in Jammu and Kashmir state, a killing committed by terrorists has been filmed and circulated," tweeted Imtiyaz Hussain, senior superintendent of police in Baramulla district.

Probably for the first time in the history of terrorism in J&K, a slaughter committed by terrorists has been filmed & circulated.There have been many in past but not filmed .No kind of terrorism is good terrorism. ISIS,HM,LeT,JeM all are same. Let us have no confusion. https://t.co/OO5cQLYfV6

Senior politician Sajad Gani Lone termed the trend worrisome. "This is a horrific phase and while society is in a slumber, there are white collar killers roaming freely ready to justify murder. Bestial savagery, nothing else," he tweeted.

A police official wishing not to be named said they suspect Kashmir militants are being influenced by the so-called Islamic State. "At first there were IS flags raised in protests. Then we saw bodies of slain militants being wrapped in black flags and now we are seeing IS-style executions," he said.

Owais Ahmad, a security columnist based in Kashmir, told ucanews.com that "everyone trashed the idea of IS coming to Kashmir when their flags were raised for the first time in 2014. Four years later, it seems that the threat is looming over the horizon," he said.

On June 23, the Jammu and Kashmir government made an official statement about the active IS presence in the strife-torn Kashmir Valley after previously refuting reports.

It came after four militants were shot dead on June 22 in an encounter with police. Barely hours later, the online propaganda wing of IS — Amaq News Agency — updated its status in Arabic claiming that all the slain militants were its fighters.

An estimated eight IS militants have been gunned down by the army in Kashmir, according to official records.

In the last 30 years, an estimated 100,000 people have died in Jammu and Kashmir, including civilians, militants and army personnel, after groups began an armed struggle for freedom from Indian rule or to merge with neighboring Pakistan.