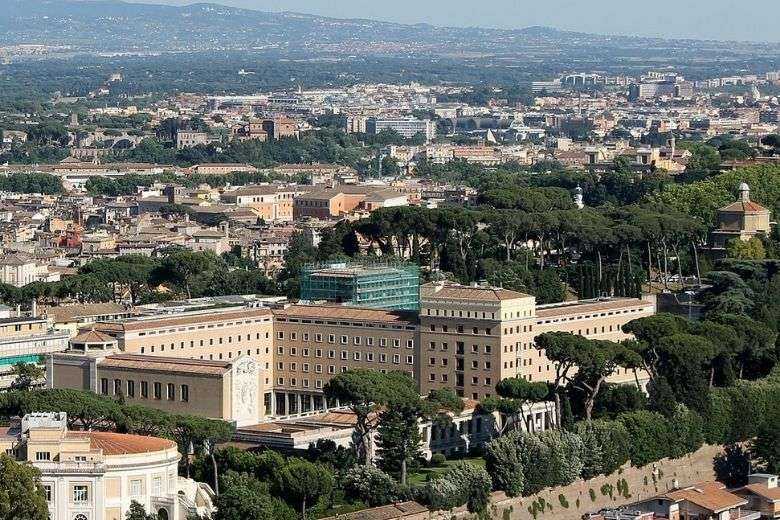 A view of the Pontifical North American College's campus on the Janiculum in Rome. (Photo: Wikipedia)

A former seminarian's lawsuit filed against the New York Archdiocese, New York Cardinal Timothy M. Dolan, Pontifical North American College (NAC) officials and several "John Does" over him not being allowed to return to the NAC is baseless and without merit, according to a spokesmen for the archdiocese and the U.S. seminary in Rome.

Anthony J. Gorgia of Staten Island, New York, alleged in a civil suit filed Feb. 3 that he was barred from returning to his studies in Rome in late 2018 after taking a short approved medical leave because NAC officials knew he had witnessed inappropriate sexual behavior at the seminary.

"The claims in this case against the Archdiocese of New York and Cardinal Dolan are absurd and have no basis in fact or law. We are prepared to defend against it and will seek its dismissal in court," archdiocesan spokesman Joseph Zwilling told Catholic News Service in a Feb. 11 email.

Father David A. Schunk, the NAC's vice rector for administration, similarly said in a Feb. 11 statement to the CNS Rome bureau the suit "is baseless and completely without merit."

"We will defend ourselves vigorously and plan to seek the dismissal of the lawsuit," he said.

Father Schunk said the seminary "was saddened to hear that former seminarian Anthony Gorgia is attempting to use civil courts to sue his former seminary, church and bishop."

He said Gorgia, who was at the NAC from mid-2017 through the fall of 2018, never reported to seminary officials that he saw the misconduct he describes in his suit.

In the suit, Gorgia said he saw NAC's vice rector, Father Adam Park, allegedly interacting "inappropriately" with a seminarian by rubbing his back and Gorgia reportedly had heard of other similar incidents. Sometime after this, Gorgia took an approved six-week leave to return to the United States for urgent surgery in October 2018, according to the suit.

During the leave, he kept up with his studies. Later that year when he was ready to return to Rome, Cardinal Dolan informed him that Father Peter Harman, NAC's rector, had blocked his return "on the basis of fabricated claims" he had made, according to the suit.

He is asking for a total of $125 million in "special economic damages" he claims he has suffered as well as damages for "mental anguish and humiliation, all of which are of a continuing nature," his 58-page suit says. He wants $50 million in "compensatory damages" and $75 million in "exemplary damages."

In a lengthy blog post, Gorgia said that after he was told Father Harman had blocked his return to Rome, he requested "on five occasions" to have a meeting on the matter with Cardinal Dolan, "which he denied me."

Cardinal Dolan apparently "wanted neither to allow me to present my documentation refuting the false statements against me, nor to receive evidence of Father Park's alleged misconduct," he said. In the lawsuit, he said false statements were made about him because he is "heterosexually oriented."

"In good faith, I could not be complicit with what I believed was a cover-up of what I knew of the vice rector, and I could do no other than resign under duress as a seminarian," he said in blog post. "Church leaders will listen to my case only when faced with a lawsuit."

Gorgia began studying for the priesthood for the New York Archdiocese in 2015. He said Cardinal Dolan "nominated me to continue my studies" at NAC. He went there in the summer of 2017 and was "a top-student with accolades from the cardinal, faculty and peers," he wrote in his blog post.

Father Schunk said in his statement to CNS: "We have full confidence in the rector, staff and seminarians of the North American College, which continues to provide excellent formation. Seminarians are encouraged to report any allegations of misconduct and assured that such allegations are taken seriously."

"Unfortunately," he added, "Mr. Gorgia never made any allegation of misconduct to NAC leadership during his time as a seminarian."