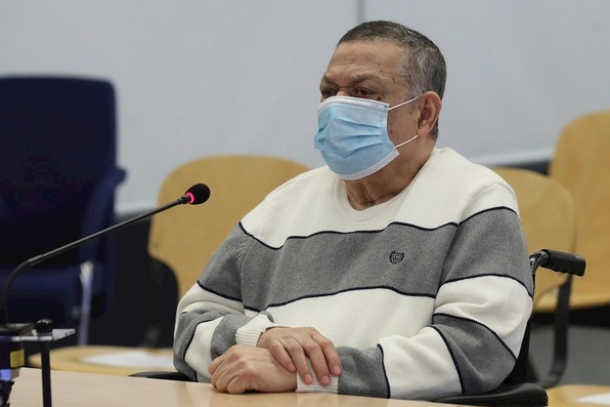 Former Salvadoran colonel Inocente Montano looks on before the start of a trial for his alleged participation in the murder of six Jesuit priests in 1989, in Madrid on June 8, 2020. (Photo: notimerica)

Inocente Orlando Montano, the former Salvadoran army colonel accused of participating in "the decision, design or execution of the killings" of six Jesuits in 1989, testified in his Spanish trial that no order was ever given to eliminate the priests.

He also disputed claims that senior military men wanted to sabotage the peace process for ending El Salvador's civil war -- a motive presented by prosecutors for the slayings -- saying the army was tired of fighting, too. Montano even professed his personal Catholicism and expressed condolences for the priests' deaths.

"I swear before this tribunal and before my God that I am not lying. I never participated in a meeting in which it was said or an order was given to kill the priests," Montano said July 15 in a Madrid courtroom.

"At no time was it mentioned in the meetings that we had that the priests had to be killed," he continued. "What was said is that the leaders of the subversion had to be controlled."

The testimony capped Montano's trial in Spain, where the trial was held because several of the Jesuits murdered were Spanish citizens. Montano, 77, sitting in a wheelchair and wearing his facemask around his neck, spoke calmly and without notes for 14 minutes.

He spoke of "lies" presented by previous witnesses, saying, "It's disgusted me what has been said against me." He also said much of the military "is Catholic, and we regret these deaths."

"I'm Catholic ... and as such I ask my Lord Jesus to enlighten me to say what I am saying and to assure that you understand in many of the versions given of the conflict ... (the deaths) were not caused by a preconceived plan ... or that there was the intention or wish to kill the priests," Montano said.

Montano's statement contradicted testimony of previous witnesses, who said the military high command gave the orders to kill the priests and that then-President Alfredo Cristiani did give a "counter-order" to stop the attack.

"The soldiers that entered the UCA" -- the Spanish acronym for Jesuit-run Central American University, where the slain priests, their housekeeper and her daughter resided -- "accused Benavides, that he had given the order," Montano said, referring to Col. Guillermo Benavides, then-director of the country's military academy. Benavides is the only person convicted of the killing and remains imprisoned in El Salvador.

Expert witnesses said the version of events -- pinning the blame on Benavides -- was implausible and that a single soldier would not have gone rogue.

Julia Elba Ramos, a housekeeper, and her teenage daughter, Celina, also were killed in the attack.

Father Ellacuria had been involved in efforts to bring peace to El Salvador. Montano, surprisingly, said he considered Father Ellacuria to be "sort of a friend," who came to ask that Montano release prisoners and people detained by the military. Montano told the court, "I never considered (him) an enemy."

"I considered him to be very honest, very correct and that he was not involved in the subversion," he said. "He simply had a friendship with the president and because of that he was committed (to) helping achieve peace in the country."

A verdict in the trial will be handed down by a panel of judges at a date to be determined.