Former Timor-Leste president and Nobel Peace Prize laureate Jose Ramos-Horta has called on the government to adopt a document on human fraternity endorsed by Pope Francis.

He said on Nov. 25 that he would talk to the current president and other government officials to adopt “Human Fraternity for World Peace and Living Together,” which seeks to be a guide on advancing a "culture of mutual respect" between Christians and Muslims as an official state document.

It was signed on Feb. 4, 2019, by Pope Francis and the grand imam of Al-Azhar, Ahmed el-Tayyeb, in Abu Dhabi during the papal visit to the United Arab Emirates and is also known as the Abu Dhabi Declaration.

“Adopting this document would show the maturity of Timor-Leste,” state news agency Tatoli quoted Horta as saying during a seminar at the National University of Timor-Lorosa'e in Dili on Nov. 25.

He said it was very important to adopt the document to maintain the well-preserved coexistence of the people of Timor-Leste.

Ramos-Horta is also a member of the committee for the 2022 Zayed Prize for Human Fraternity, an international award which was established to mark the historic meeting of Pope Francis and the grand imam of Al-Azhar.

Monsignor Marco Sprizzi, the nunciature’s chargé d’affaires, has repeatedly stated that the pope plans to visit next year after the Covid-19 pandemic subsides

Last month he met Pope Francis at the Vatican with other members of the jury, who included the undersecretary of the Holy See’s migrants and refugees office, Cardinal Michael Czerny; former Niger president and winner of the 2020 Ibrahim Prize for achievement in African leadership, H.E. Mahamadou Issoufou; and former deputy president of South Africa and former UN undersecretary-general, H.E. Phumzile Mlambo-Ngcuka.

Ramos-Horta said his request for the adoption of the document followed a request by Pope Francis and the grand imam of Al-Azhar for all leaders around the world to have its principles included in school curricula.

The 1996 Nobel Peace Prize laureate said he hoped it could be done before the pope visited the Catholic-majority country next year "or at least have the approval to adopt the document to coincide with the pope’s visit.”

The Vatican has not officially announced Pope Francis' plans to visit Timor-Leste, but Monsignor Marco Sprizzi, the nunciature’s chargé d’affaires, has repeatedly stated that he plans to visit next year after the Covid-19 pandemic subsides. 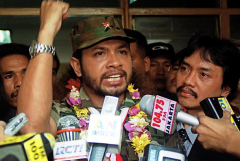 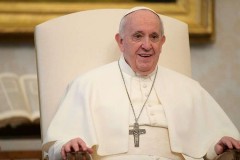