Like some other elderly cadres, 76-year-old grandma seeks solace in God's forgiveness but refuses to repent for past crimes 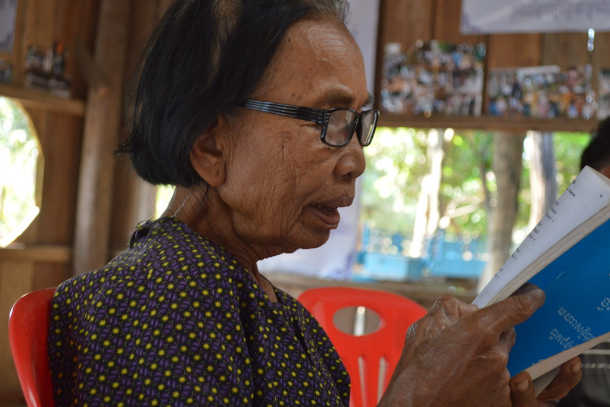 Im Chaem, 76, is a former cadre of the notorious Khmer Rouge who was in charge of labour operations in northwest Cambodia. (Photo by Sineat Yon/ucanews.com)

Anlong Veng district in Oddar Meanchey province, in Cambodia's northwest, is known as the last stronghold of the Khmer Rouge regime that ruled Cambodia between 1975 and 1979.

It's where tourists go to see Pol Pot's grave and the house of Ta Mok, a notorious Khmer Rouge leader. It's also where some former cadres now lead a quiet life.

Such is the case with Im Chaem, 76, who was charged by a United Nations-backed tribunal with crimes against humanity — including murder, extermination, enslavement, imprisonment and political persecution — in March 2015.

On Nov. 16, 2018, a U.N.-backed court found the surviving senior leaders of Pol Pot's dreaded regime guilty of genocide before a packed gallery of Muslim Chams, ethnic Vietnamese and Buddhist clergy.

Former head of state Khieu Samphan and Nuon Chea, known as Brother Number Two, were found guilty of crimes against humanity and sentenced to life behind bars in 2014, but the more recent ruling saw them each receive an additional life sentence.

The tribunal was launched in 2006 but by early 2017 it had convicted just three people — two senior leaders and the regime's chief jailer — leading critics to brand it a multimillion-dollar farce.

Chaem is believed to have overseen the killing of tens of thousands of people from 1977-78. One prosecution report blames her and another cadre, Yim Tith, for the deaths of up to 560,000 people. Her direct superior was the warlord Ta Mok, known as "The Butcher."

''Don't blame me for committing wrongs," she said from her home in Anlong Veng, about a two-and-a-half-hour drive northeast of Siem Reap, home to the famed ruins of Angkor Wat and other remnants of the seat of the Khmer kingdom from the ninth to 15th centuries.

"What I did was supposed to help and protect people's lives. I led people to do their work, to learn how to raise their children, and how to grow crops. There was nothing wrong with that."

The frail and tiny grandmother now ranks among the best-known surviving former leaders of the Khmer Rouge's nearly four-year reign of terror during which an estimated 2.2 million people died.

While Nuon Cheu, Khieu Samphan and "Comrade Duch," former head of the infamous Tuol Sleng prison, were all sentenced to life in prison, Chaem's case never made it to trial at the Extraordinary Chambers in the Courts of Cambodia, better known as the Khmer Rouge Tribunal, because it was too controversial.

Whereas the international side of the court wanted to see her stand trial, the domestic side had orders to only prosecute the most senior cadres. Her case was eventually dropped in February 2017 as she was considered to have been too low-ranking within the regime. A tall white cross now stands in front of Im Chaem's house in Anlong Veng district in Oddar Meanchey province. The property used to be a warehouse for making rice milk. (Photo by Sineat Yon/ucanews.com)

It was dismissed because she "was neither a senior leader nor otherwise one of the most responsible officials of the [regime]," the tribunal said in a statement, as reported by foreign media.

Speaking to ucanews.com, Chaem said she has since found God and converted to Christianity. That search started three years ago after her son passed away.

"I spent a lot of money trying to get my son treated. When he didn't recover, his sister invited him to become a Christian in the hope that his prayers would be answered and he would get better," she said.

Chaem said she converted to Christianity in 2018. Prior to this, she told The New York Times in an interview shortly after her case was dropped a year earlier that she spent time most of her time tending vegetables, studying Buddhist scriptures and waiting to die.

But speaking from her rural home in April 2019, she told ucanews.com that she was surprised to find a number of similarities in the rules of Christianity and those laid down by the Khmer Rouge.

"What interested me most was the similarity in the rules," she said. "In both cases, we have to follow very strict rules to become 'good' people."

During the Khmer Rouge era, Chaem worked as a district secretary in Preah Net Preah and as a deputy officer in the northwest of Cambodia. One of her main tasks was reportedly purging cadres seen as traitorous, for example by failing to meet the regime's near-impossible rice quotas due to the constraints of their crude technology and famished work forces.

Chaem has always denied committing the crimes of which she is accused.

Before she started to believe in God, she describes herself as having been in considerable pain.

"In the past, I prayed in the Buddhist way to my parents and ancestors, asking them to help me recover. I followed the previous generations, but I was unable to find the real God. I was searching and always wondering, who is He?"

She now believes Jesus' birth was predicted by ancient Buddhists.

"The Buddhist book called Trey be da states that God has not yet come to Earth, and that we will see him in the future. His name is Prey Seyha Meatrey, or the savior," she said.

"I now think they meant Jesus Christ, who had not been born at that time. It must be Him, but he didn't become a monk, and he wasn't born in a time of Buddhist influence, but after that. He came to save people."

Her analysis goes even further. She believes God sent angels to Cambodia, with Hun Sen, a former Khmer Rouge commander and the country's long-ruling prime minister, as their representative. "Because he has the ability to lead the country," she said. Yem Sarom, 52, reads a passage from the Bible about love and forgiveness. (Photo by Sineat Yon/ucanews.com)

Chaem was converted by Christopher Lapel. She now serves as a member of the Christian Missionary Alliance (CMA). Lapel, a pastor affiliated with the Golden West Christian Church, lived along the Thai-Cambodian border and converted several Khmer Rouge leaders including Kaing Guek Eav, who went by the nom de guerre Comrade Duch and was a notorious prison chief.

Anlong Veng is home to several members of the CMA as well as representatives of the TranformAsia [Orphanage] Organization, including 52-year-old Yem Sarom.

"The greatest things about Christianity are love and forgiveness," Sarom said.

"We've learned to forgive and we know that nothing can change what happened in the past. The present and the future are all that matters. We have to follow God's advice to do good things, to live with love, and to not hurt anyone.

"Chaem believes in God because He offered her the chance to become a new person and to give up her sins. God has accepted her, so she could start a new life by doing good things. That kind of forgiveness doesn't happen in Buddhism."

CMA isn't the only Christian organization that has been actively converting former Khmer Rouge soldiers in west and northwest Cambodia. Transform Asia has also appealed to former fighters and set up churches in former bases of the long-gone regime.

Yun Khem, a 63-year-old widow and former Khmer Rouge soldier, became a Christian over 10 years ago. She also now works with TranformAsia.

"I saw that other people who believed in God had found happiness, love, relief and peace, so I started to believe in Him as well. I wanted the same thing," Khem said after prayers one day at her local church.

"God loves us and offers us redemption and forgiveness. Since I started believing in Him, I always have enough energy to survive. I don't suffer and I'm not hungry, because I pray to God."

However, Khem's redemption does not go hand in hand with repentance.

"I don't feel regret from what happened. I went with the flow, just as other people did," she said.

"I was a teenager and I never felt scared. I think I felt a sense of pride whenever we won a battle. Some say the Khmer Rouge killed more than 2 million people, but I don't believe that. I think some people just want to make us look bad."

Khem said her mother died when she was young and she had a fraught relationship with her stepmother. "I didn't get any love at home. That's one reason why I joined the Khmer Rouge, because I was not alone anymore. But now, I feel happy to have God," she added.

Unfazed by fears of Hell

At Chaem's church, a group of believers could be heard reading a passage from the book of Romans in the New Testament on the day ucanews.com visited.

"I believe God will help me to find redemption but I have to do good things. Even though I cannot be as great a person as Jesus, at least I can be one of his disciples," Chaem said.

When asked if she feared Hell as punishment for her sins, she paused for a moment before answering in the negative.