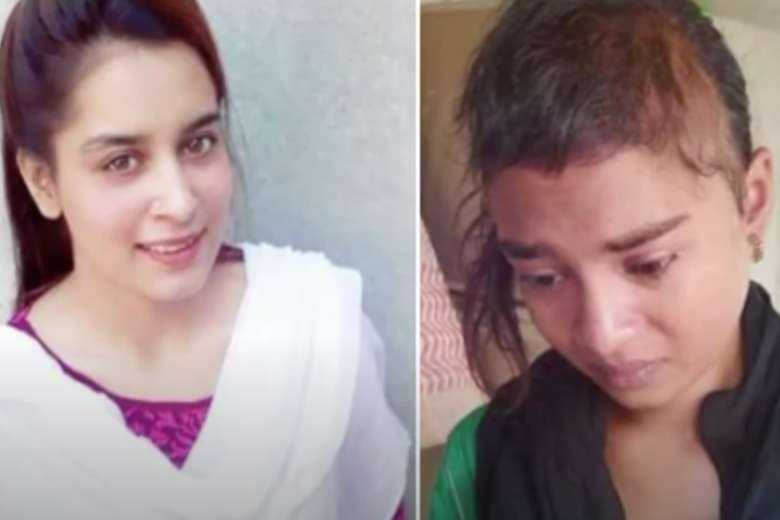 Sunita Masih, a 14-year-old Christian girl, was raped, molested, beaten and subjected to bullying in which her head was shaved by her attackers. (Photo: YouTube)

While scrolling through my social media feed, my eyes fixed upon the troubled reflection of innocent angel Sunita Masih. She was staring back at me with helpless orbs. Her eyes betrayed the discomfort of humiliation and, without even uttering a single syllable, she proclaimed the tale of injustice through her misery-laced expression. It’s not the first time I’ve apprehended a tale of misery through the eyes of a victim and, unfortunately, I know it might not be the last.

Sunita, a 14-year-old Christian girl, was raped, molested, beaten and subjected to bullying in which her head was shaved by the culprits. This whole torture was an ordained punishment for not converting to Islam. The evident terror on the face of the innocent child just shatters my heart, for I cannot even bring myself to think about the suffering she has endured for the sake of following her faith.

They say evil weeds swallow good fruit with their venom. If they can’t swallow the good fruit, they infiltrate the roots with poison to stunt the growth and suffocate the plant. The plant keeps gasping for traces of sunlight but it only imbibes the essence of the fatal poison. The poison gradually shatters every bit of its identity, transforming the fruit into one of the poisonous weeds.

The crisis we are facing regarding forced conversion is highlighted by this story. The good fruits are the innocent girls born with the fate of being a minority in Pakistan. The poisonous weeds are the extremists living in our society.

The fatal weeds initiate their endeavors by swallowing the child one way or another, by offering the child the option to convert to Islam. If the child resists, they know how to inculcate the child with a belief system they will force her to follow. Even when the child gasps for sunlight, the child is forced into living in a system where she would just imbibe the poison being inculcated within her existence.

These forced conversions are nothing but ways of ordaining criminality. It’s the most efficient way paved by some warped genius: first rape the child and ordain the rape with the divinity of religion and in the end consider it all an act of blessing by marrying the minor. I’ve witnessed this story so many times. The name changes but the story of the ordained transgression repeats itself over and over.

A report by the Center for Social Justice cited 162 allegations of forced conversion between 2013 and 2019. This figure merely covers reported cases; there are so many other cases that barely receive the limelight of sympathy and mercy.

What’s infuriating in this whole situation is how the media turns a blind eye to all these cases. I’m amazed how feeble our media betrays itself to be every time there’s a case proclaiming the tale of suppression and torture minorities are subjected to in Pakistan.

It's funny how I posted the story of Sunita and the first question I was asked was about the credibility of the source as it wasn’t covered by any leading newspaper or TV station. I felt insulted at that moment. How plausible the stories of certain international influencers can be, yet they need the credibility of a case being reported by an NGO in their own country. What bothers me is not the attitude of these people but the slogan of justice they raise for other atrocities while deliberately turning a blind eye towards the horror show being exhibited in various parts of Pakistan.

Last year one case that actually received media attention was that of Maria Shahbaz, a 14-year-old Christian girl who was abducted and raped. To eradicate the stains of sexual abuse, the girl was forcefully converted and with the knot of marriage the whole dilemma of sexual abuse and abduction was erased.

Somehow her parents found a way to question the reliability of the marriage certificate and produced proof of her being a minor. But the court just turned everything into a joke for the people seeking justice and announced the misery of the child would continue by handing her over to her abductors. As the girl has the label of puberty engraved within her body, she is old enough to tie the knot, announced the court.

I don't think I have the audacity to even imagine the life the court gifted the precious child. Maria is not the only Christian girl who received the splendid present of living with her abductor. For Huma Younas, who is now pregnant with the child of her abductor, the court announced the same verdict: a life with her abductor. Can you imagine that? Can you feel the intimidation these innocent lambs must endure their whole lives?

I think in the end it doesn't matter whether the case ends up being in the limelight, for what that fragile girl has endured cannot be eradicated by the media's condolences. Her feeble existence just shatters my heart for how gallantly she stood the ground of her faith. I barely have the courage to imagine a 14-year-old child being subjected to physical beating. yet she endured it all.

The sympathy I might offer this young child is of no significance. The public’s act of empathy and sympathy has no credibility in my eyes if there is going to be another Sunita after a period of 3-4 months. If there isn’t going to be proper legislation against forced conversions, I'm afraid we will just hear the same story every other day with a different title and different victim.

If the system isn’t ready to punish the wrongdoers, I'm afraid we will just witness more of these cases. Maybe they won’t be reported but they will proceed at the same pace we are observing now. As the public, maybe we can find a way to voice support for minority rights in the same way we dare to vocalize it for global issues.

Anee Muskan is a published author and young journalist in Pakistan who writes about religious affairs and minority rights. The views expressed in this article are those of the author and do not necessarily reflect the official editorial position of UCA News.