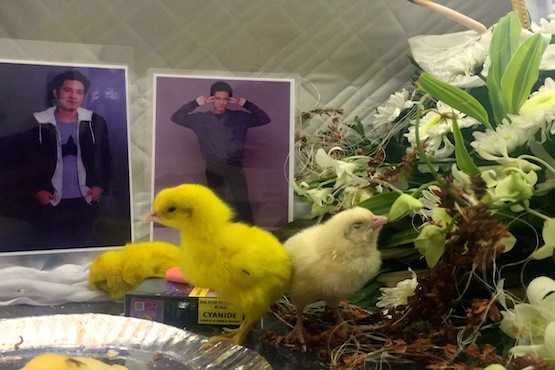 Chicks peck at the favorite snacks of Carl Angelo Arnaiz, another teenager killed by police in what state forensic experts call a possible execution. (Photo by Juan Tapang, Jr)

Philippine government forensic experts have found signs of torture and death by execution on the body of another teenager killed in what Manila police claimed was a gun battle.

The Public Attorney's Office on Sept. 3 said it is preparing murder charges against police in the northern Manila suburb of Caloocan over the death of Carl Angelo Arnaiz.

The 19-year-old Arnaiz, a resident of Cainta town on the eastern edge of the capital, disappeared late on Aug. 17, the day after police shot dead 17-year-old student Kian de los Santos in a killing that was captured on CCTV and sparked outrage.

Kin found Arnaiz's body in a morgue, not far from where de los Santos died, ten days after his disappearance.

Police said they shot Arnaiz a few hours after he left the family home. They said he fired at police trying to arrest him for robbing a taxi driver. They also claimed he was carrying drugs when he died.

The trajectory of five bullets that entered Arnaiz's body indicates gunmen shot the young man while he was kneeling, which also happened to De los Santos, Acosta said.

The two youth were similar in other ways: Both were sons of women working abroad to improve the family's income. Both helped their stay-at-home fathers with small family stores.

Arnaiz was a valedictorian of his elementary school class and a scholar at a competitive science high school. He enrolled on an interior design course at the country's premier state-run university last year but dropped out after doctors diagnosed him with clinical depression.

His family described him as sheltered, with no knowledge of guns. His sister, Camille, said he was responding well to medication and had no previous brushes with the law.

Even Arnaiz's wake had uncanny similarities to that of de los Santos. Yellow chicks also stood atop his coffin, pecking away at his favorite snack. The family said the animals' actions symbolize a knocking on the doors of conscience.

The director of police in Manila suspended two officers connected to Arnaiz's killing.

The head of the national police, Director-General Ronald de la Rosa, expressed frustration, both with erring members of the police and an increasingly hostile public.

"What is our purpose if we act worse than criminals?" the police chief demanded at a press conference.  "Then we all become criminals. We need to separate ourselves from criminals."

But he also begged the public "not to judge the police" or see law enforcers as the enemy.