Even torture could not silence Chinese Catholics Many priests were imprisoned in Shaanxi during the Cultural Revolution. The photo shows people reading posters criticizing the Catholic Church on a street notice board. (Photo supplied by Lang Tao Sha)

Thomas Zhang was born in Yaozhang village of Liquan county in Shaanxi province of central China in 1944. His family learned about Catholicism from his grandmother, while one of his maternal uncles was a priest.

In 1961, after graduating from junior high school, Zhang helped his family to farm and followed his uncle and other parish priests to preach around the area.

During the so-called Four Clean-ups Movement unleashed by Mao Zedong in 1963 to target people branded as reactionaries, Jingyang, Gaoling and Sanyuan counties of Shaanxi were the most affected as members of working groups set up by the Chinese Communist Party were stationed in each faithful's house, living with them to brainwash them.

Zhang, 74, recalled: "At the beginning of the Cultural Revolution, society was chaotic, unorganized and undisciplined. Many priests were imprisoned and my family was also affected."

In 1966, when Zhang was 22, church members were forced to hand over their sacred icons and holy books. Red Guards (militant university or high school students) beat drums and shouted at the doors of the faithful, who were labeled monsters and demons.

Students in Xian city, the capital of Shaanxi, organized the national series, one of the social mobilization measures that Mao launched in the Cultural Revolution (1966-76), from the second half of 1966 to the beginning of 1967. Red Guards travelled around China to exchange propaganda.

These young people were aggressive to anyone who would not listen to Mao and would hang big cards on their chests labeling them as lackeys. Many people suffered this fate.

Zhang said many church members were also persecuted. One who was attacked by an animal could not receive medical treatment because he was a Catholic. He died of tetanus.

The priest was labeled a reactionary and paraded through the streets with his married brother and his wife. A man beating a gong led the way to draw the public's attention and their faces were painted in black and red. The priest was later imprisoned along with many other priests across the country. 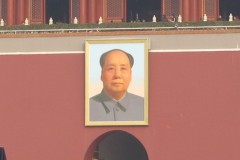 Even though the Cultural Revolution was so chaotic, Zhang's family still adhered to their faith.

The husband of Zhang's maternal aunt and the married uncle saw there was no priest to preach, so every night they rode bicycles stealthily to those villages where Zhang and his priest uncle had been preaching to nourish the faithful. Zhang went with them every time.

They preached in the homes of trusted faithful. As they were preaching, church members stood watch at the entrance to the village and at the door of the house. If any suspicious person appeared, the preachers would leave immediately.

Zhang read lots of books hidden in his priest uncle's house. Books about the church enriched his spiritual world and helped him to write many articles in the future to testify for the Lord.

Zhang's family later refused to publicly declare his apostasy. As a result, the married uncle and his wife were publicly humiliated and Zhang's brother and cousins were all sentenced to jail for two to 10 years.

He was very angry when he saw his married uncle and his wife, who were just ordinary peasants, forced to wear paper hats for refusing to declare their apostasy.

"I could not help and went up to the stage where they were being humiliated and tortured to take their hats," Zhang said.

Red Guards forced him to the ground and labeled him a reactionary. He was humiliated and tortured at night. He was later sent to a production team to work as a laborer.

"In the team, a man working for a day can earn 10 points for exchanging food at the end of the month. Even those who were labeled as having impure thoughts could earn eight points a day, but I, as reactionary, had none," Zhang recalled.

After the Cultural Revolution, Zhang was still enthusiastic about preaching. At 50, he was supposed to help his family to farm but he went to help a church by doing voluntary work without a wage.

Recalling his experience in the Cultural Revolution, Zhang said with emotion: "If there is no help from God, I am not so smooth. Everything is arranged by God."

Lang Tao Sha is a Chinese Catholic and journalist. One more of Lang's articles about China's Cultural Revolution will follow this second report.