Even torture could not dim Chinese priest's faith 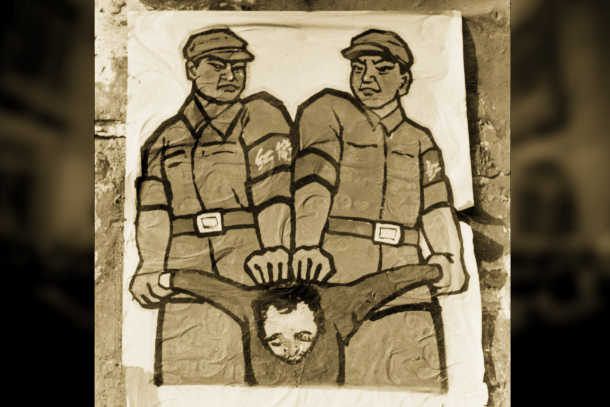 During a public humiliation session Father Bian Zhen-fang of Baotou Diocese was forced by Red Guards into this position called “flying an airplane a jet”. (Photo by AFP)

Despite the horrors of Mao Zedong's Cultural Revolution, a priest in Inner Mongolia managed to evangelize and take care of the weak, even while in prison.

Father Bian Zhen-fang of Baotou Diocese in the Inner Mongolia Autonomous Region in China's north is now 95 years of age. Over the course of modern China's history he has endured much.

After being ordained in 1953 at Inner Mongolian capital Hohhot (abbreviated to Hushi and formerly known as Kweisui), Father Bian served as a parish priest in a church in Xiao Balagai in Baotou.

About 6,000 people in Xiao Balagai were Catholics. The local church occupied about 30 acres of land and it included middle schools, a convent and a nursery home.

Repression of Catholics in the region ramped up in 1965 when Inner Mongolia's Chinese Patriotic Catholic Association declared that Pope Paul VI was a "great landlord" who had occupied land in China. Communist authorities ordered the pope to be publicly denounced, and clerics needed to do so as well.

Paul Wang, an elderly church member of Baotou, told ucanews.com that during this period only three priests out of 130 in Inner Mongolia refused to denounce the pope. "Father Bian was one of them," he recalled.

Father Bian told ucanews.com that the pope is the head of the church, and it could not function without his leadership. "Since I believe in the leadership of the pope, I should obey his leadership," he said.

For his refusal to denounce the pope, Father Bian would be publicly humiliated and tortured when the 10-year Cultural Revolution began in 1966. In August of that year Red Guard students from Baotou's First Middle School forced their way into the church shouting Maoist slogans: "Destroy the four olds, cultivate the four news" and "Revolution is no crime, rebellion is justified."

Worse was to come as the Red Guards publicly humiliated and tortured Father Bian and two old nuns, Han Jinzhen and Chen Deying.

Day and night, many times every day, Red Guards paraded the priest through the streets where some villagers screamed and kicked him. One old man hit him with a rod, injuring his thigh.

As part of their campaign, Maoists stole a bronze bell from the church. It weighed an estimated 200 kilograms and Father Bian was ordered to carry it 500 meters to a blacksmith furnace where it would be destroyed.

"It was simply hell on earth, and people now can't imagine it," Father Bian said. "However, at that time I took the bell as a cross, imitating Jesus carrying the cross to Calvary Hill for execution after he was whipped."

Father Bian did not give up his faith and he was sent him to Prison Number 2 in Yamenkou in Donghe district in Baotou. There was no trial, no charges, nor was he told how long he would be detained for.

In prison, Father Bian was placed in a small cell with 20-30 people who had to eat, sleep and go to the toilet in the same space. It was the beginning of what would be eight years of imprisonment.

During that time, he always chose to sleep in the most unwanted part of the cell to save others doing so. "I didn't want others to suffer … It didn't matter what I had suffered as I dedicated my sufferings to God," Father Bian said.

While imprisoned the priest recited his prayers daily and reflected on what he had learned in the seminary.

Nor did Father Bian neglect pastoral work. He took care of a prisoner sentenced to death and helped him repent; he also forgave the sins of an inmate who had committed murder. He likewise served several imprisoned Catholics, offering them spiritual comfort.

It wasn't until November 1974 that he was released from prison and sent to his brothers' home in Donghe district, where he was monitored by local authorities. He had to report if he was leaving his house — even if only going out for 15 minutes. Despite this burden, he helped poor villagers establish a sewing team so that they could earn a living.

The nuns, Sister Han and Sister Chen, were not arrested or imprisoned but also faced public humiliation and torture every day. They were made to work very hard in a production team to earn their living. Father Bian managed to reduce their physical labor.

Father Bian also sought ways to reach out to local Catholics and in secret he offered confession, anointing of the sick and even matrimony sacraments.

Wang said that through Father Bian's consistent efforts Catholics began forming a community. "Though he could not celebrate Mass, the priest tried his best to explain the teachings of the church to the faithful during his short visits and blessed them, instilling them with the Holy Spirit in their hearts."

In 1980 the United Front Work Department of Baotou carried out the policy of the central government and announced it would rehabilitate Father Bian and restore his priesthood. He began to preside over construction of Xiao Church and carried out pastoral work.

Father Bian has always stressed that no matter what happens, he must testify for faith, not letting down God's calling and taking the road of being sanctified.

He has retired and is cared for by nuns and church members in his parish.