Almost a week ago, the director-general of the World Health Organization, Dr. Tedros Adhanom Ghebreyesus, tweeted saying: “Too many #HealthWorkers have lost their lives while trying to save others. Health care is #NotATarget. The principle of medical neutrality must be respected by all. Attacks on health care are attacks on humanity.”

He is right, of course, and around the world we see doctors, nurses and other frontline healthcare workers celebrated like never before for their courage and dedication in the battle against the Covid-19 pandemic.

Except by the Chinese Communist Party regime. When the coronavirus was first reported by doctors in Wuhan, the Chinese government’s response was not to listen to their expertise but to silence them, threaten them and even arrest some of them. Some whistleblowers, such as Dr. Ai Fen, have disappeared. Others, like Dr. Li Wenliang, were warned by police to “stop making false comments” and investigated for “spreading rumors” — before he then died of coronavirus himself.

The Chinese regime’s repression of the truth is increasingly regarded as the primary cause of this global pandemic, and a growing number of voices, not least the president of the Federation of Asian Bishops’ Conferences, Myanmar’s Cardinal Charles Bo, want it to be held accountable.

This disregard for humanitarian principles now seems to extend to Hong Kong. The United Nations has made some very alarming allegations about the Hong Kong Police Force’s treatment of medics. Four UN experts released their letter to the Chinese government on April 19 — two months to the day after it had been sent — demanding answers to reports of a shocking campaign of harassment, intimidation and arrest of humanitarian medical workers during protests in the city last year. They were met with silence.

These allegations were first brought to the world’s attention by Dr. Darren Mann, a British surgeon working in Hong Kong, in medical journal The Lancet last November. He had been voluntarily assisting the injured in Hong Kong’s violent protests last year, along with teams of other medical professionals, treating both wounded students and injured police officers. These medics embody the humanitarian principle of neutrality and as such should be celebrated and supported, not threatened.

Over the past six months I have come to know Dr. Mann reasonably well, have heard him present evidence in the British parliament and seen the photographs he took personally. The chilling image of medics lined up in rows with their hands zip-tied behind them, under arrest, is engraved on my mind. As an experienced surgeon who worked in Hong Kong for over two decades and served in some of the world’s most severe conflict zones, trained in clinical ballistics and the law of armed conflict, he knows not only what he saw but what it amounts to: a grave violation of international humanitarian norms.

The UN experts have now brought further evidence to light. Following their own investigation, the UN special rapporteurs on physical and mental health, freedom of peaceful assembly and association and the right to privacy, together with the Working Group on Arbitrary Detention, cite reports that “large numbers of healthcare workers have been arrested and handcuffed with zip-cords either in the vicinity of violent confrontations or in the course of performing their legitimate healthcare duties” and that even when they provided identification as healthcare workers, they were reportedly arrested by police for “taking part in a riot” and detained for 24 hours with no access to a lawyer before being released on police bail pending charges.

They also claim that “based on reports received, police have hindered healthcare staff at public hospitals when they perform their legitimate health duties, insisting on being present when doctors privately consult with patients, including in delivery rooms, and attempting to enter operating rooms when persons suspected to have participated in protests are due for surgery.”

If these reports came from Syria, Iraq, North Korea or Myanmar, or from any of the world’s worst war zones, poorest countries or most repressive dictatorships it would be shocking enough, but perhaps less of a surprise. But it is a travesty for this to be happening in a city that is among the most developed in the world, is supposed to have a “high degree of autonomy” from mainland China under the “one country, two systems” principle and was, until recently, one of the most open in Asia. It adds to the litany of examples of how Hong Kong’s human rights are being dismantled, the rule of law undermined, autonomy eroded and freedom crushed.

Hong Kong police already stand accused of indiscriminate and disproportionate violence against protesters, beating young people with extreme brutality, firing pepper spray and tear gas in the faces of journalists, demonstrators and passers-by, and shooting rubber bullets at point-blank range. One Indonesian journalist, Veby Mega Indah, lost her sight in one eye as a consequence, but no police officer has been held to account. The UN has already expressed concerns about the use of hazardous chemical substances by the police. But now add to the catalogue of horrors these claims about the arrest and abuse of medics.

These allegations are far too serious to ignore. The international community must speak out.

Firstly, there must be a genuinely independent inquiry. Hong Kong’s Chief Executive Carrie Lam has rejected this possibility, so if it cannot take place in Hong Kong, it should be established internationally, ideally under the mandate of the UN along similar lines to recent inquiries on Myanmar and North Korea. But if the UN won’t do it, there should be an independent people’s tribunal similar to the recent body that investigated allegations of forced organ harvesting in China.

Secondly, we need targeted Magnitsky-style sanctions against those responsible, directly or through complicity, with these violations.

And third, as we look at how the Chinese Communist Party treats its own people, breaks its promises and threatens its critics around the world, we all need to rethink how we engage with this regime. It is a regime that thrives on fear, torture and lies and one that is terrified of the truth. If the rest of the world stands up together for truth, and for international humanitarian norms, we may prevent further tragedy. Those of us who clap for our carers saving lives in the pandemic should also stand up for those medics who are arrested, intimidated or disappeared in China and Hong Kong. After all, as Dr. Mann says, you can’t clap for carers with your hands zip-tied behind your back. Dr. Tedros, what say you?

Benedict Rogers is founder and chairman of Hong Kong Watch. The views expressed in this article are those of the author and do not necessarily reflect the official editorial position of UCA News. 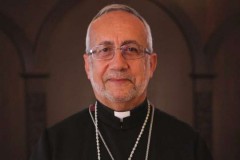