Frail and hard of hearing, Father Ernest Poruthota still wants to see changes in the Church Even in his advanced years, Father Ernest Poruthota is not content to spend his days remaining quiet about the Sri Lankan Catholic Church and its role in everyday life.

The 88-year-old priest is still hoping to see more changes within the establishment and especially in one of his beloved spheres, the film industry, which he says needs to give a chance to young people to create productions on contemporary themes.

He also maintains that there is a need for the Church to have a change of attitude toward non-Catholics in that “we should be more respectful and open to them.”

“We are rather slow in opening to these,” he says, adding: “We should be able to take in all good values, especially friendship and fellowship.”

The reason the Sri Lankan film industry is slow is, he believes, because “we don’t see national trends and we have not taken care of them.” In fact “people are more secular and spiritual values are not cared for.”

A keen critic of local filmmakers, Father Poruthota explains that the industry in Sri Lanka “is very slow in opening out and does not care about younger people and new creators.”

Now living at the St. Peter and Paul Church in Lunawa, Moratuwa, he is under medication and in need of help to get through his daily chores.

Frail and hard of hearing, the eternal rebel is still outspoken about changes he wants to see in film. It is an industry accused of not responding to modern trends but it was ever thus, he says.

Father Poruthota fell in love with the cinema when he started out as a young seminarian and was shown films about the Catholic Church. It was then that he wanted to learn more about the industry and took an ardent interest in it. 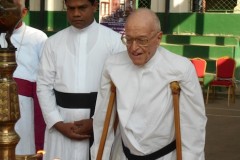 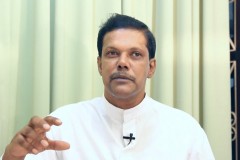 At a time when the film industry was falling out with the Church, he believed it was important the latter opened up to it and exploited it more.

“It so happened that at the beginning there were not many priests involved in cinema,” he says. “I had [producer, director and screenwriter] Lester James Peries and [veteran film director] Dharmasena Pathiraja and other young, new creators come up and I happened to meet them often in various meetings and seminars.”

So when, in 1973, he was appointed the first director of the Sri Lankan branch of the International Catholic Organization for Cinema (OCIC) now known as SIGNIS, there were not many priests involved in this sector and not many taking an interest in learning the art.

“I came to know Lester as a parishioner at Dehiwela and made friends in cinema and attended cinema festivals and seminars,” he recalls.

Nowadays he has noticed a welcome change, with more young people entering the Sri Lankan film industry than ever before, adding that: “They are not cared for by way of reviews, study and exposure.”

He believes Sri Lankan productions are still very poor, technically and theme-wise, while insisting that there needs to be “more young people involved that can change the current trend.”

Father Poruthota says the reason for many young people being ignored is due to a lack of backing from the commercial sector of the industry and also that public demand is more for foreign films.

The octogenarian continues to comment and give his views when asked for on any new productions and continues to serve as a member of the OCIC.

Although he wants to engage in a number of activities, Father Poruthota says he is restricted because of age and time.

He is researching the subject and keen to write about it, having already received help from two of his friends.

“Is the Church really serious about young creators and is it open to young creators? These are two questions that trouble my mind,” he says. “Because I think the Church as a whole just makes appointments of priests but doesn’t see the value it has and can contribute to the country.”

He commended one such new priest, an oblate presently involved in the OCIC and UNDA (the International Catholic Association for Radio and Television), whom he believes deserves attention.

Father Poruthota was sent to a seminary on his parents' insistence and he believes that being in the priesthood has been a good thing for him.

The renowned priest now lives with his cook and maid, who look after him, and moves about with the aid of a walker in a house next to the Lunawa church.

Friend to the famous

He has been influential in assisting many upcoming filmmakers to make their mark, especially when he came across Dharmasiri Bandaranayake.

The director told ucanews.com that upon the release of his first film “Hansa Vilak” in 1979 he first showed it at the OCIC center.

“I met Father Poruthota at the Malwatte Road OCIC center, where I used to go and watch movies while working as a clerk in Fort,” says Bandaranayake.

He remembers that the OCIC center would showcase one good movie every week and Father Poruthota would also have a workshop for new filmmakers there, along with Sri Lanka’s veteran cinematographer Andrew Jayamanne, who started his education in cinema there.

The same year, 1979, when Bandaranayaka’s first film was released, he took it to West Germany’s Mannheim’s Film Festival, where new filmmakers’ productions were being showcased for a competition.

He recalls that his contribution was accepted because Father Poruthota had a friend working at the film festival.

Bandaranayaka explains that while today it would be possible for anyone to make a similar contribution, at that time things were not so easy and “it was hard to gain prominence” so the priest is honored universally for his support to the local film industry.

“We have built up our careers around his influence,” Bandaranayaka says, adding that two more contemporary priests, Fathers Jude Lal and Benedict Joseph have also been influential supporters.