Even aid workers are not safe from Rohingya-Rakhine clashes 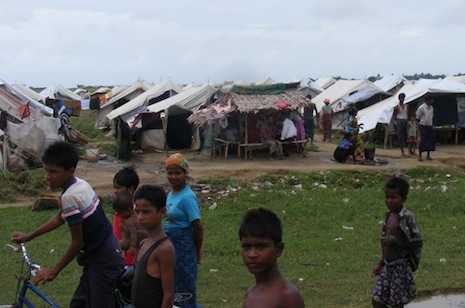 A camp for displaced Rohingyas on the outskirts of Sittwe

More than three months have passed since violent clashes erupted between Buddhist Rakhines and Rohingya Muslims in Western Myanmar. Though the humanitarian conditions among the refugees of that violence have improved in recent weeks, the mutual hatred and suspicion between the two communities persists as reports of new violence emerge. In Sittwe, the provincial capital, the Rakhine majority has reached an informal consensus that Rohingyas uprooted by the violence and now living in makeshift camps outside the town will not be allowed to return for any reason. On September 4, a small group of Rohingyas came to Sittwe’s largest market to buy produce, accompanied by riot police for their protection. As soon as news spread of their presence, a group of Rakhines armed with sticks came out to meet them and police moved quickly to return the Rohingyas to their camp on the outskirts of the town. “We cannot let in any Rohingyas in the town again who are always plotting against us,” said Khin San Mu, a Rakhine shopper at the market. He added that the Rakhine shopkeepers would not sell anything to the Rohingyas even when they offered to pay twice the going price. Animosity towards the Rohingyas has been so intense that even aid workers from international relief organizations operating in the region, many of whom are Muslims and mistakenly identified as Indian, have been the targets of mob attacks. Ko Shine, a Muslim man from Yangon working as part of the Malaysian Relief Agency, was beaten last week on a street in Sittwe by a group of Rakhines in broad daylight and was forced to leave the town. He suffered minor head injuries. “I would not go back again to Rakhine state,” said Ko Shine, who is now back in Yangon and receiving medical treatment for his injuries. However, the violence has also affected the Rakhine community. Rohingyas reportedly attacked two Rakhine men in separate incidents last week. One of the victims was later found dead in a paddy field. These attacks took place as members of the state-backed Commission of Inquiry into violence in the state made their first visit to the region. A member of the commission, who spoke on condition of anonymity, said the conflict on racial and religious lines was so complex, there was no easy solution to integrate the two communities. Oo Hla Thein, attorney general for Rakhine state, said the official policy of integration has faced fierce local opposition from Rakhines. “We want both communities to live in peaceful co-existence again," he said. But what can we do when the local population is against it?” For now, nearly 60,000 Rohingyas and 5,000 Buddhist Rakhines whose houses were burned down in the conflict are still homeless and living on food aid from the UN and other aid agencies. “We want to go back to our homes and get recognized as full citizens. But we have no idea when that can happen,” said Mahmud Tayab, a 26-year-old Rohingya refugee. Related reports Rakhine state curfew widens