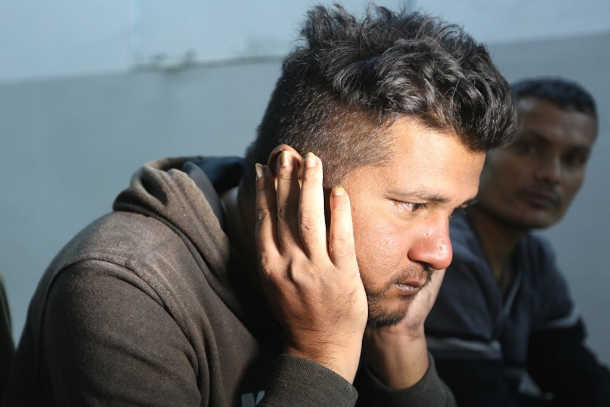 Ahmed Bilal, a citizen from the Sylhet region of Bangladesh and a survivor of a boat carrying migrants that sunk in the Mediterranean during the night of May 9-10, rests at a shelter in the Tunisian coastal city of Zarzis on May 11. About 60 people perished when the trawler carrying 70-odd migrants sunk in the Mediterranean, Tunisian officials said. A fishing boat reportedly picked up 16 survivors, who were then transferred to military vessels involved in the search-and-rescue operation. (Photo by Fathi Nasri/AFP)

Before attempting the perilous sea journey across the Mediterranean in May, 25-year-old Afzal Mahmud had harbored the same goal for the last 12 years: to leave Bangladesh and settle in Europe at any cost, even illegally.

"Afzal grew up watching his relatives get rich after sending some of their family members to Italy and France, so the dream of changing his fortunes by moving to Europe made him ever-more determined to go," his cousin Rabel Ahmed told ucanews.com.

Mahmud came from a middle-class family in the Golapganj area of the country's northeastern Sylhet district, but he lacked any vocational skills.

"His family was well-off so he didn't really need to go looking for work abroad," Ahmed said, adding they repeatedly tried to discourage Mahmud but their pleas fell on deaf ears.

In the end, his family agreed to the exorbitant financial demands of local "brokers" at a recruitment agency, and Mahmud flew from Dhaka to Dubai on Dec. 14 along with dozens of other Bangladeshi men chasing the same goal.

After 10 days in Dubai, the group headed to Turkey and then Libya where they boarded a trawler for Italy on May 9.

The boat capsized in rough seas about 65 kilometers off the Tunisian coast. The government dispatched three military vessels on a rescue operation but 60 passengers on the trawler died, including 37 Bangladeshis — and Mahmud.

"My cousin was desperate to change his future, but he didn't realize he was also risking his life," Ahmed said.

"The brokers took a lot of money from his family, but they never informed him about the sea crossing. If they had, I think he would have reconsidered and would still be alive today."

Migrant deaths at sea have become a common trend in recent times, but authorities in Bangladesh claim the number of people seeking a better life in Europe has been dwindling since 2017 due to enhanced security and surveillance measures by local law enforcement officers.

Hasan cited research indicating that as many as eight in 10 young people in South Asian countries dream of settling in Europe.

"In Bangladesh, the European dream is extremely popular and widespread. Opportunistic human traffickers fuel that dream and put many lives in danger," he added.

It used to be only people from the lower rungs of society who would risk their lives to start over in Europe, but now more ambitious 20-somethings from Bangladesh's middle class are following suit, said Abu Bakkar Siddique, a point man for the Home Ministry's Anti Human Trafficking Task Force.

"Those more ambitious types believe they can change their lives overnight, he said. "The human traffickers use that weakness to ensnare them."

Often, Bangladeshis who legally migrate change their mind when they discover the reality does not match what they have been promised, Siddique said.

"After landing in a foreign land they realize they have been cheated, and must contend with low pay, poor working conditions, and huge debts," he told ucanews.com.

"Some endure the suffering while others migrate elsewhere, legally or illegally."

Siddique conceded Dhaka lacks an effective monitoring system for its migrant workers after they leave its shores.

"If a person wants to move to a country and they have all the legal documents, we have to let them go," he said.

"We have no control over what happens to them after that. This is a serious shortcoming we must address and overcome," he added.

"We'd like to build more awareness of the problem at various levels within the country, and also form an anti-human-trafficking coalition with other countries along the popular trafficking routes."

Many households in Bangladesh depend on money sent home from family members who work abroad.

This has put the country ninth in the global rankings — and third among South Asian countries — in terms of foreign remittances by expat workers, according to data from the World Bank in 2018.

In the past decade, about 100,000 Bangladeshis have made their way to Europe illegally in search of citizenship and political asylum, European Union research indicates.

Over 21,600 have already done so this year as of May 8, including 17,000 by sea, the International Organization for Migration (IOM) said.

Meanwhile, the IOM said 443 migrants have either died or gone missing in the Mediterranean this year while trying to reach Europe by boat.