Catholics must proclaim their message of hope 'with renewed ardor' 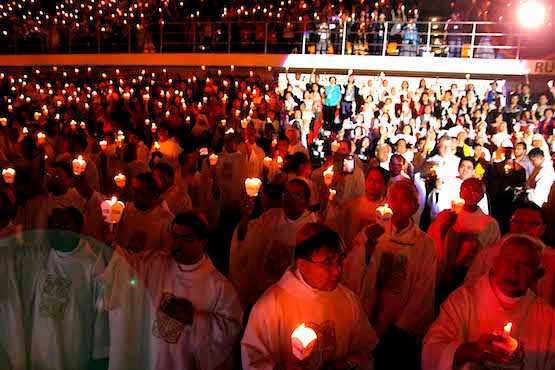 Church leaders and lay people gather in Manila for a new evangelization summit in 2013. (Photo by Joe Torres)

Something significant in the life of the Catholic Church is about to happen in Asia, particularly in the Philippines, although not so many seem to be aware of it.

Some 15,000 people from about 90 countries, and at least 1 million Filipinos, are expected to arrive in Cebu this weekend for the International Eucharistic Congress, the 51st since they started in Lille, France, on June 21, 1881.

The last one was held in Dublin, Ireland, in 2012, where discussions included the church's failure to respond appropriately to cases of child abuse by clergy and religious. It was something that captured the imagination even of the secular media.

Without the juicy gossip about church scandals and controversies, what happens at a gathering of thousands of clergy, religious, and laity?

For more than 100 years, participants at eucharistic congresses gather for an open-air celebration of Masses, adoration of the Blessed Sacrament, and other devotional ceremonies and rituals.

In 1937, the first eucharistic congress in Asia was held in the Philippines and was attended by at least 1.5 million people from around the world. Some 600,000 people reportedly joined a religious procession around the old city of Manila while several thousand more attended pontifical Masses held in a field outside the walled city.

An act of mission

What makes this year's congress significant is its call to mission at a time when the Catholic Church in many parts of the world is facing a demographic crisis.

Jesuit theologian Father Catalino Arevalo noted that the theme for this year's gathering, "Christ in You, Our Hope of Glory," fits well in the life of the church in the Philippines as it prepares to mark the 500th anniversary of the arrival of Catholicism in the country.

Father Arevalo described the eucharistic congress itself as a "great act of mission," the Eucharist as a missionary event and the "source of mission and the finality of mission."

The theologian said Filipinos, who are mostly Christians, have to hold up Jesus for all of Asia and for the entire world to see.

Pope Francis, seemingly overwhelmed by the crowd of people who welcomed him during his trip to Sri Lanka and the Philippines in 2015, noted that the "future of the church is in Asia."

Several observers have also noted that Asia offers potential for the Catholic Church to counterbalance a falling membership in Europe and the United States.

Telling the story of Jesus

Asia, with its 4.5 billion population, has the smallest percentage of Christians of all the world's continents. With all the Catholics, Protestants, members of small Christian churches and the Orthodox Church combined, Christianity comprises about 5 to 6 percent of the continent's population.

Seemingly aware of this reality, organizers of this year's congress declared that the church must proclaim its message of hope "with renewed ardor, utilizing new methods and expressions" without forgetting those "who, though baptized, have drifted away from the church and live without reference to Christian life."

In Dublin in 2012, the gathering looked at the "Eucharist as Communion," a sharing of life and unity of the community of believers. This year, the eucharistic congress calls for a communion of all people. "Not just a kind of a communion just among us," Father Arevalo said.

Jesus is definitely not known yet in most of Asia but the Jesuit theologian warned that the mission in this part of the world does not mean converting people and making them Christians.

"Our job is to present Christ, to tell the story of Jesus. ... Once they meet Christ, then it's up to Him and the Holy Spirit to have His effect on their lives."

The challenge to the institutional church — with its own internal demons to face like the issues of clergy sex abuse and financial scandals at the Vatican — is how to "hold up Christ for Asia" with credibility, and tell the story of Jesus to the world burdened with conflicting ideologies.

Joe Torres is an author and ucanews.com's bureau chief in the Philippines.