A woman working at a garment factory in Vavuniya, Sri Lanka. (Photo: AFP)

Human Rights Watch (HRW) has urged the European Union (EU) to set out a framework for Sri Lanka to comply with its human rights commitments to retain tariff-free access to EU markets.

The international rights organization maintained that concrete improvements are urgently needed for Sri Lanka to maintain its trading privileges.

“EU pressure over a sharply deteriorating human rights situation has led the Sri Lankan government in recent weeks to promise reforms, but these gestures have been superficial and unreliable,” said Lotte Leicht, HRW’s EU advocacy director.

“The EU should call out these blatant violations of Sri Lanka’s obligations under the Generalised Scheme of Preferences (GSP) Plus rules and be clear about the consequences if human rights violations and impunity for war crimes persist,” said Leicht in a letter to the EU on Sept. 21.

A delegation from the EU is to visit the country to discuss the GSP Plus trade concession. Sri Lanka was the EU's largest trading partner in goods in 2020. The country exported goods worth US$3.1 billion to the EU and is expected to implement international conventions on human rights, labor rights, the environment and good governance.

The trade concessions were pulled out by the EU in 2010 on grounds that Sri Lanka had to be held accountable for violations of human rights but the facility was granted again in 2017.

The government has campaigned to regain the trade benefits for several products entering the EU market and in particular the apparel industry.

When GSP Plus concessions with the EU were lost in 2010, it resulted in 25 apparel factories closing with the loss of 10,000 jobs. 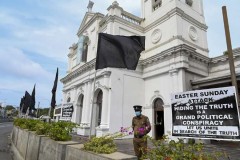 A Catholic nun who is a labor rights activist said workers are not allowed to engage in trade union activities and open discussions with employers on issues affecting their livelihoods.

“The government should be held accountable for its actions on the allegations of human rights violations,” said the nun who wanted to remain anonymous.

Sri Lanka’s Foreign Minister G.L. Peiris, speaking at the UN Human Rights Council on Sept. 21, said: “We are open in acknowledging our challenges and, as a responsible and democratic government, we are committed to achieving tangible progress on the entire range of issues relating to accountability, reconciliation, human rights, peace and sustainable development.”