Rohingya refugees stranded at sea are seen on a boat near the coast of Cox's Bazar, Bangladesh, on May 2. (Photo: AFP)

The European Union has urged all armed forces in Myanmar to implement an unconditional ceasefire and recommit to an all-inclusive peace process.

“This would help addressing the root causes of the plight of the Rohingya,” EU High Representative Josep Borrell and Commissioner Janez Lenarcic said in a statement on May 1.

The bloc continues to advocate “the safe, sustainable, dignified and voluntary return” of Rohingya refugees to their place of origin and for “ensuring full accountability for the crimes committed against them.”

“Several hundreds of Rohingya people, including women and children, have been drifting for weeks at sea in appalling conditions, being pushed away from the shores in the Bay of Bengal and the Andaman Sea,” EU officials said.

The EU urged governments in the region “to conduct a search and rescue operation and to find a solution for their safe disembarkation.”

Rights groups say hundreds of Rohingya are stranded on at least two trawlers between Bangladesh and Malaysia as Southeast Asian governments tighten borders to keep out Covid-19.

EU officials have hailed Bangladesh as “showing continued generosity and humanity” as it granted safe landing and assistance to 400 Rohingya on one of the boats on April 16.

On May 2, a small boat carrying 43 people came ashore in southern Bangladesh and some of the arrivals were sent to Bhasan Char, a remote island off the coast where Bangladesh previously planned to house Rohingya, according to media reports.

Myanmar’s western Rakhine and Chin states have been locked in an intensifying civil war between the military and the Arakan Army demanding more autonomy for the ethnic Rakhine. 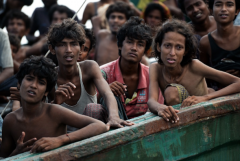 The United Nations said “ongoing conflict continues to hamper these efforts” — providing essential food, shelter and sanitation to those who have been displaced, continuing assistance to long-term internally displaced persons and others in need across the country.

Over 78,000 people are displaced in Rakhine and Chin states due to the ongoing conflict — a more than 50 percent increase since the beginning of the year, according to the UN.

Ola Almgren, the UN’s humanitarian coordinator in Myanmar, has stressed that continued conflict is also a major impediment in the fight against the Covid-19 pandemic.

Myanmar has reported 155 confirmed cases, including six deaths and 43 recovered, according to the latest data.

On May 2, emergency food supplies from the UN's World Food Programme (WFP) reached communities stranded for months in Paletwa in Chin state and some 3,700 conflict-affected people will receive food assistance from the WFP.

It said that for the past few months trade and supply routes going into Paletwa, a remote town in Chin state, near the border with Rakhine, have been largely cut off due to intensified fighting.

“Families were forced to skip meals and forage wild plants for food,” WFP said, adding “some resorted to selling or eating their livestock, a coping strategy that could hurt longer-term agricultural productivity and food security.”

The WFP said the delivery was hampered by lack of security earlier when, on April 29, a convoy of five WFP contracted trucks carrying food aid was fired on by unidentified gunmen while en route to Paletwa. One convoy worker sustained a minor injury and three trucks were damaged.

“Despite this, the convoy was able to continue its journey. When the food reached a river crossing point near Paletwa, WFP shipped it by boat to reach its final destination,” WFP said.