Government should not accept return of refugees as they are not Myanmar citizens, demonstrators say Monks and ethnic Rakhine protesters take part in a demonstration in Sittwe, the capital of Rakhine State, on March 19 against a government push to speed up the citizenship verification process for Rohingya. (Photo by Khine Htoo Mrat/AFP)

Hard-line Buddhists have called on the Myanmar government not to accept the return of Rohingya refugees who have been fleeing strife-torn Rakhine State since Aug. 25.

More than 1,000 people, including Buddhist monks, on Oct. 22 protested over the issue in Sittwe, the capital city of Rakhine.

Protests were also held in townships such as Maungdaw, Pauktaw and Minbya.

Nearly 600,000 Rohingya have fled to Bangladesh in the wake of a bloody Myanmar military crackdown described by the United Nations as ethnic cleansing.

Aung Htay, an organizer of the Sittwe protest, said the government should not accept Rohingya refugees as they are not Myanmar citizens.

"Most refugees have links with the Rohingya militant group, the Arakan Rohingya Salvation Army, so we strongly oppose the government’s plan of repatriation," Aung Htay told ucanews.com.

He said repatriation would lead to more conflict.

Ashin Aha Ri Ya Won Tha, a Buddhist monk from Sittwe, was more flexible, stating that there could be acceptance for those who complied with a national verification process to apply for citizenship.

However, if they continued to use the term "Rohingya," the citizenship process might not be successful, the monk warned.

Sultan, a Rohingya from Maungdaw Township, said he and other Rohingya are not illegal immigrants as they have been living in Rakhine for generations. 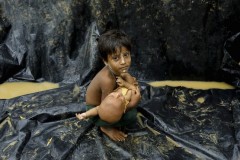 He has been applying for citizenship since 1989, but has still not received a national registration card.

"We oppose the government’s national verification process as it attempts to treat us as foreigners, not citizens of Myanmar," Sultan, a former schoolteacher, told ucanews.com.

Myanmar’s leader, Aung San Suu Kyi, has pledged that those verified as refugees will be accepted back from Bangladesh with assurances of security and access to humanitarian aid.

Such a provision is included in a 1993 agreement between Bangladesh and Myanmar.

Bangladesh’s home minister, Asaduzzaman Khan Kamal, was due to discuss details of the repatriation process during a visit to Myanmar on Oct. 23.

A 1982 citizenship law states that only ethnic nationalities, and others whose families entered the country before 1823, are entitled to Myanmar citizenship.

Based on this law, Rohingya have mostly been denied citizenship and accompanying rights.

The military, hard-line Buddhists and political parties, including the ruling National League for Democracy, as well as the military-backed Union Solidarity and Development Party, support the 1982 citizenship law.