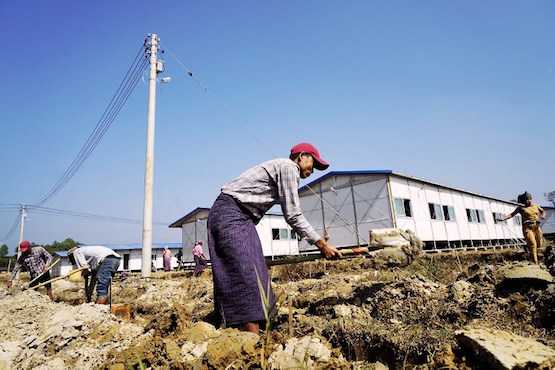 Myanmar workers dig a trench around structures just recently set up by Myanmar authorities in a field on the outskirts of Maungdaw in Rakhine state on Jan.24. The structures will be part of the Taung Pyo Letwe receiving center, which will help receive Rohingya refugees that fled to Bangladesh seeking refuge from violence last year and who are willing to return to Myanmar in the near future. (Photo by Cape Diamond/AFP)

Ethnic Rakhine have told Myanmar's government that they are opposed to Rohingya refugees being resettled in southern Maungdaw in restive Rakhine State.

Some 80 people from civil society groups across Rakhine held a meeting in capital Sittwe on Feb. 24 to discuss the resettlement of Rohingya returning from Bangladesh.

Soe Naing, from the Rakhine Social Network and organizer of the meeting, said the government is planning to resettle Rohingya refugees at six places in southern Maungdaw that have seen outbreaks of violence since the 1940s.

"We are very concerned for the security of local ethnic people if Rohingya refugees are resettled into the area as the two communities living together is not possible," Soe Naing, an ethnic Rakhine, told ucanews.com.

He said part of the area is coastal and a wall cannot be built along the border, raising concerns about illegal immigrants from Bangladesh.

"We want the government to scrutinize and verify all returnees from Bangladesh because militants are among the people, so we worry for our sovereignty," Soe Naing said.

Rakhine people held a meeting with Win Myat Aye, union minister for relief and resettlement, in early January but said they did not get a clear response to their questions about the resettlement plan.

Zaw Win, an ethnic Rakhine from Buthidaung town in northern Rakhine, said they did not want conflict to erupt again.

"We don't oppose the government's plan of repatriation but the returnees must be former inhabitants of Rakhine and obey the laws and regulations of Myanmar," he told ucanews.com.

Rohingya refugees in Bangladesh have demanded citizenship and other rights and have a political agenda of occupying Rakhine land, Zaw Win said.

"We worry for the security of our ethnic people and the sovereignty as they [the Rohingya] have a political agenda of taking land from Rakhine," he added.

Myanmar's parliament recently approved a budget of about US$15 million for construction of a fence along the border with Bangladesh in Rakhine State.

Hatred and bigotry toward the minority Rohingya Muslims is deeply rooted in Rakhine. Most people in Myanmar insist on referring to the Rohingya as Bengalis, implying that they are illegal immigrants from Bangladesh. However, vast numbers of Rohingya have lived in Myanmar for decades.

Bangladesh and Myanmar agreed a plan for the return of refugees to Rakhine in January.

Since late 2017, the government has cleared at least 55 villages of all structures and vegetation using heavy machinery. Most of these villages were among the 362 villages completely or partially destroyed by arson since Aug. 25.

Brad Adams, Asia director at Human Rights Watch, said on Feb. 23 that "bulldozing these areas threatens to erase both the memory and the legal claims of the Rohingya who lived there."

"It's our appeal to our sister Aung San Suu Kyi to wake up," Karman was reported as saying by the Dhaka Tribune. "Otherwise she will be one of the perpetrators of this crime. If she can't stop all this crime, then she has to resign now."

Myanmar State Counselor Suu Kyi, herself a Nobel laureate, has been widely criticized for her failure to speak out in support of the Rohingya and prevent the military's atrocities.