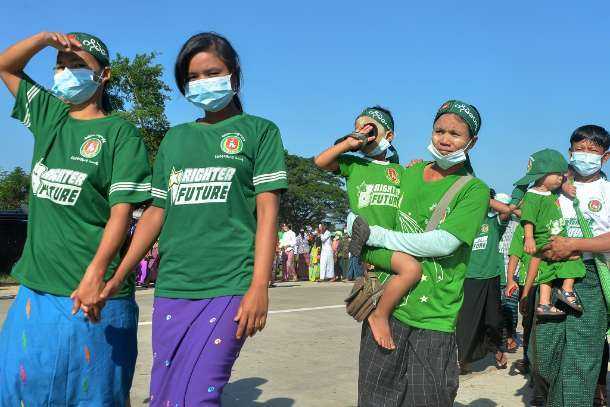 Supporters of Myanmar's opposition Union Solidarity and Development Party protest against the results of the general election outside the Union Election Commission building in Naypyidaw on Nov. 15. (Photo: AFP)

The Union Election Commission declared the final results on Nov. 15, with the NLD grabbing 396 of the 498 contested seats in the bicameral parliament. The party secured the 322 seats it needs to form a government.

There are 664 seats in the national parliament but one quarter are reserved for unelected military officials.

It’s the second resounding victory for the ruling NLD following a first landslide in the 2015 election which formally ended decades-long military rule in the conflict-stricken country.

The military-linked Union Solidarity and Development Party was resoundingly defeated by Suu Kyi’s party as they won just 33 seats, less than in the 2015 election.

In Rakhine and Shan states, however, ethnic parties performed well and took more seats than the NLD as they collectively won 34 seats in parliament.

In conflict-riven Rakhine and Shan states, elections were canceled due to the security situation that disenfranchised nearly 1.4 million voters including Rohingya Muslims.

Ethnic parties merged in 2018 into single parties as a strategy to win more seats in the 2020 election by learning lessons from previous elections.

Following its resounding victory, the NLD reached out to ethnic parties to join it in building a federal union.

The NLD sent a letter to 48 ethnic parties on Nov. 11 titled "The issue of unity and Myanmar’s future" signed by its vice-chairman Zaw Myint Maung.

“The aims of the ethnic parties align with those of the NLD and our party will focus on the wishes and desires of ethnic people in the future,” says the letter. “We hope that ethnic political parties will eagerly cooperate and work with us towards building a federal democratic union.”

Observers see it as a good sign as part of an effort to ensure peace and build a federal union in a country where fighting is still raging in minority ethnic areas.

There were high expectations for Suu Kyi’s government among ethnic groups following the NLD’s sweeping victory in 2015 but the relationship between the party and ethnic parties has soured in the last five years over the lack of peace in ethnic borderlands.

Suu Kyi’s father, General Aung San, led the country to independence from Britain, reaching an agreement regarding self-autonomy and federalism with the Kachin, Shan and Chin in 1947, but he failed to secure several other ethnic groups.

Soon afterwards, Aung San was assassinated and the deal was never fulfilled. In the aftermath, ethnic groups took up arms against the central government.

Since then, ethnic groups from Myanmar’s seven states have long called for what Aung San agreed — a system based on federalism and autonomy. The rights of minority groups were neglected during the decades-long rule of the Bamar majority’s iron-fisted military.