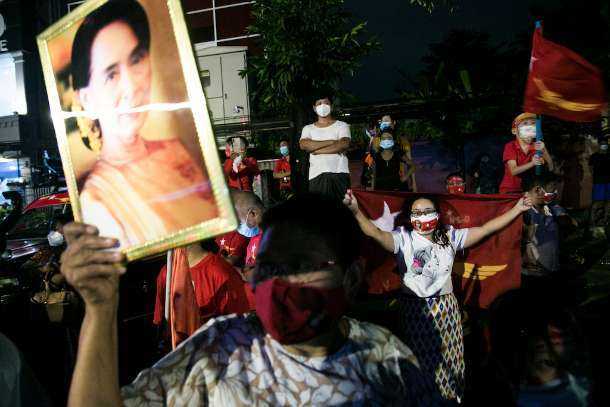 Supporters of the National League for Democracy hold portraits of Aung San Suu Kyi and flags as they celebrate in front of the party's headquarters in Yangon on Nov. 9 as NLD officials said they were confident of a landslide victory in the general election. (Photo: Sai Aung Main/AFP)

Ethnicity-based political parties in Myanmar are struggling to win seats as Aung San Suu Kyi’s National League for Democracy (NLD) party is poised for a resounding victory in the general election.

The ruling NLD has gained much support in seven ethnic states, according to early unofficial results of the Nov. 8 poll.

Ethnic parties had expected they would grab more seats than in 2015 when they suffered major losses.

The NLD is set to win many seats in Kachin, Chin, Mon, Karen and Kayah states but do less well in Rakhine and Shan states.

Ethnic parties merged in 2018 into single parties as a strategy to win more seats in the 2020 election by taking lessons learned from previous elections.

Minority ethnic groups make up a third of Myanmar’s 54 million people. Major Christian populations are found among them in the states of Kachin, Chin, Karen and Kayah.

Thousands of NLD supporters were marching in the streets of Yangon and Mandalay on the evening of Nov. 9 in a victory celebration.

Citing their own data, NLD officials claimed they are about to win another resounding victory by getting more than the 322 seats they need to form a government.

The NLD has won almost all seats in Bamar-majority areas such as Yangon, Mandalay, Magwe, Sagaing, according to early official results.

Suu Kyi has been re-elected to her lower house seat in Kawmu constituency, near Yangon, according to the official result on Nov. 10.

The state counselor said she was profoundly grateful to all the people who made the elections a success in spite of the Covid-19 pandemic.

Britain commended the 2020 election as a significant milestone on Myanmar’s path from military dictatorship to democracy but it was disappointed to see the Rohingya and other minorities once again disenfranchised.

“It is now vital to amend the citizenship laws to ensure that everyone can participate fully in Myanmar’s political process,” the UK said in a statement on Nov. 9.

US Secretary of State Mike Pompeo said the US had concerns about the large number of seats reserved for the military and the disenfranchisement of groups including Rohingya.

“We stand with the people of Burma, including those barred from voting in this election, as they seek to exercise their rights,” he said.