Peace conference delegates from the Akha ethnic group from eastern Shan State wearing traditional costume adorned with silver ornaments arrive for a session at the convention center in Naypyidaw on Sept. 1, 2016. (Photo by Romeo Gacad/AFP)

Ethnic groups in Myanmar are seeking the release of accurate data from the last census in 2014 to support better education and healthcare for minorities, in addition to other development projects and social and cultural issues.

The government, which has already taken flak for the alleged persecution of Rohingya Muslims, has withheld details about the size of ethnic populations for the last four years due to the sensitivity of the data, critics say.

"We acknowledge it takes time to get the accurate lists but the government need to carry out consultations with ethnic leaders," U Zo Zam, chairman of the Chin National Democratic Party, told ucanews.com.

He said the data should reflect diversity within the country, where armed militias are still struggling to thrash out peace agreements.

"We can overcome difficulties and controversies through debate with all relevant stakeholders," he said.

"The government needs to delegate the ministry for ethnic affairs to help it so they can release the accurate data within a set time frame."

Thein Swe, Union Minister of the Ministry of Labour, Immigration and Population, said in Myanmar's upper house on Feb. 21 that the government was unable to release the findings at this time due to ongoing disputes over who belonged to which ethnic group.

He said certain groups have asked to be recognized as a separate ethnicity and not as a sub-ethnic group, while others have requested they change their affiliation from one ethnic group to another.

The minister provided more examples of contentious issues that have hindered the census from clarifying ethnic demographics.

Taking the case of the Kachin, he said there could be between six and 12 sub-ethnicities depending on who you listen to. Others dispute claims the Chin have 53 sub-ethnic groups. 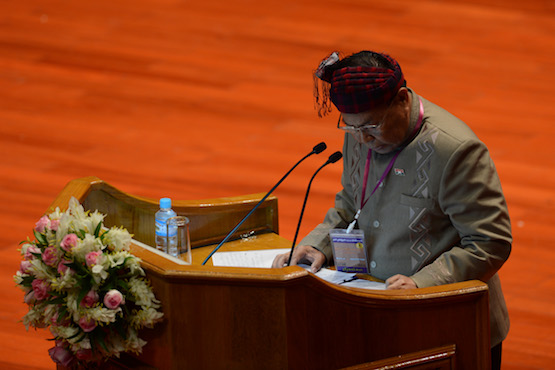 The 2014 census was released over three decades after the previous edition was published in 1973.

However, the question on ethnicity proved to be one of the most controversial even before the census was carried out in March and April of 2014.

Khet Htein Nan, chairman of the Unity and Democracy Party in Kachin State, said Myanmar has fudged data about ethnicity for decades.

He blasted officials for withholding the latest census list citing the sensitivity of the issue.

"The data about ethnicity is essential as it relates to the economics, culture, healthcare and education of ethnic groups as we work toward peace," Khet Htein Nan, an ethnic Kachin and former lawmaker, told ucanews.com.

"Respecting the human rights of ethnic groups is something the government needs to prioritize," he added.

He said the government must take responsibility and be held accountable for the findings and their timely release. He also urged it engage in more consultations with ethnic groups to resolve some of the sticking points.

Shay Ray Shu Maung, an upper house lawmaker for the ruling National League for Democracy Party in Kayah State, said many factors could be behind the government's decision to refrain from publishing the list, aside from fears the data is incomplete.

He spoke about the difficulty of obtaining accurate exact data as many villagers from far-flung areas lack national registration cards. Some are not even able to vote in local elections.

"The government is struggling to verify and classify all the ethnic groups," Shay Ray Shu Maung, a Catholic and ethnic Kayah, told ucanews.com.

However, many Christians live in ethnic-based states such as Chin, Kachin, Kayah and Karen.

Myanmar is one of the most culturally diverse countries in the region where ethnicity is a complex and politically sensitive issue.

Ethnic groups have long believed the government manipulates ethnic categories for political purposes, according to a report by the Transnational Institute (TNI), a policy institute.