Refugees who fled their homes due to violence between indigenous groups are seen here at the Evangelical Church of Indonesia Evanhastia in Dekai, Papua, on Oct. 6. (Photo: Florianus Geong)

At least six people were killed and thousands forced to flee during clashes between two indigenous groups in Indonesia’s Papua province sparked by allegations of witchcraft, police said Oct. 6.

Violence flared between members of the Kimyal and Yali tribes in Dekai, the capital of Yahukimo district, on Oct. 3.

At least 41 people were reportedly injured in the violence, many of them seriously.

Some were later transferred to hospitals in the provincial capital Jayapura.

Papua police spokesman Ahmad Musthofa Kamal said the conflict was sparked by accusations from the Kimyal tribe that their rivals were practicing witchcraft which led to the death of Abock Busup, an influential Kimyal member and former Yahukimo district chief.

Medical authorities later confirmed he had died from a heart attack.

Five Yali people were killed as was one Kimyal member, while three houses and a hotel owned by another member of the Yali tribe were burned

He said the Kimyal armed with bows and machetes then set out in two minibuses to hunt down Yali people in their homes and churches.

Five Yali people were killed as was one Kimyal member, while three houses and a hotel owned by another member of the Yali tribe were burned.

Kamal said police had arrested 52 people and were hunting others in connection with the violence. 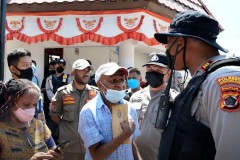 Florianus Geong, a Catholic activist based in Dekai, said food and clothing are being sought for more than 4,000 refugees who took refuge in police stations and military posts.

"There are also some who fled to churches," he told UCA News on Oct. 6.

He said church people in Dekai were organizing assistance from Catholics. The situation is still tense and people are afraid to return home, he added.

In 2018, a conflict between the Yali and Ngalik tribes, also in Yahukimo district, killed two people and injured six, including a policeman.

Collectivity is what causes them to mobilize in large numbers, either to create conflict or to resolve conflicts

Last year violence in Jayapura between the Nafri and Enggros tribes over a land dispute left seven people injured.

Adriana Elisabeth, coordinator of the Papua Peace Network, said such conflicts are common in Papua because there are no conflict resolution efforts involving indigenous leaders, so when there is a dispute, each group “looks for its own version of justice.”

There needs to be a well-organized conflict resolution mechanism in which there are representatives of ethnic groups and the government, she told BBC News Indonesia.

She said every group in Papua is equal, whether they are a minority or majority, and has a collective character.

"Collectivity is what causes them to mobilize in large numbers, either to create conflict or to resolve conflicts," she said.