Massive damage and looting has occurred in Adigrat, a diocese in Ethiopia's semi-autonomous region of Tigray, where the government launched a military offensive nearly two months ago, reported a delegation from the Ethiopian bishops' conference.

Cardinal Berhaneyesus Souraphiel, conference president, sent the delegation to the diocese in mid-January, with instructions to visit and physically see Bishop Tefaselassie Medhin of Adigrat.

Father Teshome Fikre Woldetensae, secretary-general of the bishops' conference who led the delegation, said the bishop is safe and in good health, but his diocese is reeling from the destruction that will take a long time and cost the church millions to repair.

Fighting in Tigray started Nov. 4 after Ethiopian Prime Minister Abiy Ahmed Ali sent the federal army to fight the Tigray People's Liberation Front, which he accused of attacking an army base in the capital, Mekele. On Nov. 28, the government recaptured Mekele.

Bishop Medhin's safety had become an issue of concern after he was cut off from the rest of the church due to fighting.

The delegation reported a church compound in the diocese was used as a military command center, even when the parish priests and the Daughters of St. Ann were staying there. The priests and the nuns witnessed heavy fighting.

"Adigrat minor seminary building and water tanker (are) partly damaged by the shelling fragments of the explosives, chapel at the cemetery is partly damaged, and windows ... of the high school are damaged and broken," said the report of the delegation. It also spoke of damage to a nearby Orthodox church and mosque as well as damages to church buildings.

The Catholic Church report comes amid international media reports that churches and mosques in northern Tigray were attacked, with sacred treasures, including ancient manuscripts, damaged or looted.

The team also said the administration offices and classroom buildings at Wukro St. Mary's Catholic College were broken and looted, with laptops and computers stolen. Trees in the college were dying, the report indicated, after the solar panel, which provides power to supply the college with water, was stolen.

Delegation members spoke to officials of the U.S.-based Catholic Relief Service, which had reached 50,000 people with food in Mekele. More people were targeted for food distribution. 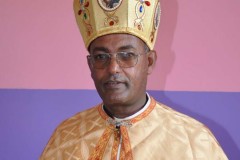 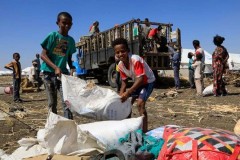 At a meeting with the interim administration, government officials said 4.5 million people needed emergency support all over Tigray.