A woman cooks food for her children inside a temporary shelter for families displaced by the eruption of Mount Mayon, a volcano located about 330 kilometers south of Manila. (Photo by Angie de Silva)

Feeding thousands of people displaced by a volcanic eruption about 330 kilometers south of Manila has become a titanic struggle for the Catholic diocese most affected by the volcano, it bishop says.

Bishop Joel Baylon of Legazpi said providing food for 84,000 people has become a "tall order" especially because the threat posed by the erupting volcano is ongoing.

The prelate said church leaders and government officials have been cooperating closely over the past few days to provide for the needs of displaced residents.

"Most evacuees are farmers and do not have anything to augment their needs except for whatever relief goods they get from aid agencies," said Bishop Baylon.

He said his diocese has devised ways to immediately respond to the needs of disaster victims.

The prelate said the church can only provide basic requirements, such as food, to families affected by Mount Mayon, one of the most active volcanoes in the Philippines.

Feeding the people the same food every day "will not be good," said the bishop, adding the evacuees have been surviving on noodles, sardines, and other canned goods and dried fish in the past weeks.

Bishop Baylon said the diocese has started a micro-finance project for farmers in the area who plant and engage in agribusiness activities.

The produce will then be distributed to displaced families identified by the diocese. The prelate described the strategy as a "win-win program" for producers and the displaced people.

The prelate assured that the church will continue helping provide basic needs of people in evacuation areas. 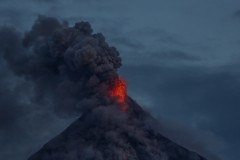 "The Catholic Church in Legazpi will continue to do its share to help," said Bishop Baylon.

The prelate said the government needs all the help it can get to attain a level of normalcy especially in crowded evacuation centers.

A total of 55 volcanic earthquakes and nine rockfalls were recorded by the government's seismic monitoring network.