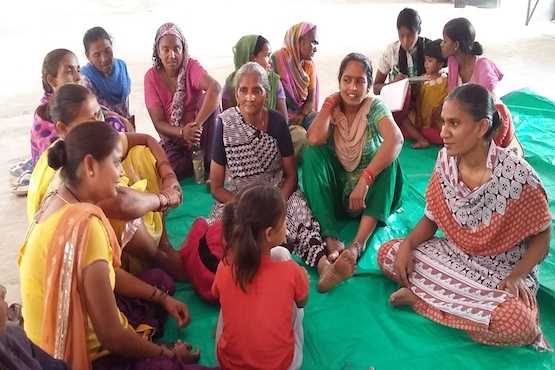 Sister Kalai Selvi sits at a Hindu temple, located near a slum, waiting for domestic workers to gather at the end of their day's work.

The Franciscan Missionaries of Mary nun, hair in a neat bun, greets them with a smile and chats about problems they face in the Jasola area of India's capital New Delhi.

"We have to coax them to come here," she told ucanews.com.

Common difficulties include inadequate pay and poor living conditions as well as ill treatment that can include sexual harassment or exploitation.

Sister Selvi, who is a member of the National Domestic Workers' Movement (NDWM), also goes door-to-door advising women on their rights.

She helps infuse a sense of dignity through awareness and advocacy programs as well as leadership and skills training.

Women are encouraged to join the NDWM, which has about 500 members in Delhi.

In 2003, she was given a teaching job in the central-eastern India state of Chhattisgarh where she witnessed poverty at first hand.

For the past decade, Sister Selvi has done social work including, since last year, dealing with domestic workers.

"I was not aware about the kind of exploitation they have to go through," she said.

However, it was not always easy to convince the women — whose job it is to clean, cook and look after children — that they have rights.

Firstly, they suspected she really wanted to engage in religious work. "Secondly, they expect something in return, like money," Sister Selvi said.

She raises with employers issues such as underpaying employees.

Taravati, a 14-year-old domestic worker in the Jasola area, praised Sister Selvi's for going directly to her place of employment.

"She personally went to the house, met my employer and made them pay my wages," she said.

However, domestic workers living in the homes of their employers are difficult to assist, especially when their movements are restricted.

Most of the women and girls who stay full time with employers are from the poorer states of Jharkhand, Chhattisgarh and Odisha, Sr. Selvi said, adding that "human trafficking" was one of the issues she has to deal with.

Catholic domestic workers attending church on Sundays are given pamphlets outlining their rights as well as listing phone numbers for them to contact in cases of any emergency.

However, in one case, a woman was sacked from her job of 25 years because she began to talk to Sister Selvi in church.

Largely un-unionized "domestics" can face non-payment of wages, a lack of holidays and termination of employment at the whim of employers as well as physical, mental or sexual exploitation.

While there is a dearth of hard statistical data, the International Labor Organization (ILO) estimates there are nearly four million domestic workers in India making a large indirect contribution to the economy.

However, their voices are often not heard due to a lack of specific laws to protect them and also because their work is unreasonably considered to be unskilled.

The Indian government supported, but has not yet ratified, a 2011 ILO convention requiring a fixed minimum wage for domestic workers, ensuring their security and provision of decent living conditions.

The Franciscan Missionaries of Mary was founded in British India in 1877 and has since spread to 77 countries around the world.